Sugar Ship Wreck, or Sugar Wreck, is a sunken freighter that lies west of Perhentian Kecil, after it sank in 2000 during a monsoon. The 90-meter-long/295-foot-long wreck used to carry sugar and is now a growing artificial reef.

Since it is still a relatively new wreck, it does not exhibit the coral growth you’d see on older ships, but marine life is pretty good. Divers can spot barracudas, scorpionfish, stonefish, lionfish, snappers, sweetlips, trevallies, jacks, sea urchins, and more. 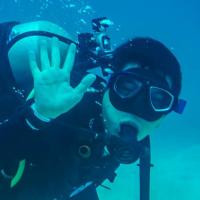 Panorama Diver, located at Pulau Perhentian Kecil - Long Beach is a family run business that caters to backpackers, travellers and holidaymakers who are looking for Fun Dives or Scuba Diving Courses together with clean, basic, affordable and low-budget rooms or dorms. We are surrounded by trees that cools the place down especially on a hot, sunny day. It only takes you a mere 3 minutes’ walk for your toes to step on crystal, clear water. Within the same compound, Panorama restaurant provides daily breakfast, lunch and dinner. Perhentian Island has more than 20 dive spots that are suitable for all levels of experience. New divers can have a nice relaxing reef dive while be amazed by the brilliantly colored tropical fish and coral. Experienced divers can enjoy the freedom of spectacular reef diving, adventurous wreck diving and deep dives in an extremely idyllic and laid back setting. We teamed up with our neighbour Panorama Chalet to offer value for money Dive + Room packages which can be found on our website. Please note the accommodation provided is of basic beach-hut style. All standard rooms which are used for Dive + Room Packages are simple, but clean wooden bungalows for two people with fan, mosquito net and a bathroom with cold water showers. Rooms are set on a shady hill with lots of native trees just seconds walk to the beautiful beach. As Pulau Perhentian has no mains power, generators are used to supply power to the chalets which normally runs from 7pm-8am and 12noon-3pm. Panorama has a village feel with the chalets, great restaurant selling local and western meals from 8am-10pm daily, a small shop selling fruits, cold drinks and snacks and of course Panorama Diver. Everything you need is right here! There are no ATMs on the island so please bring enough cash for your stay as most of the restaurants and shops do not take credit card (Panorama Diver and Panorama Restaurant do accept card payments).

Anti Gravity Divers Perhentian, Malaysia is a PADI 5-Star Dive Resort and scuba diving center located on Coral Bay, also known as Teluk Aur, on Perhentian Kecil, off the east coast of peninsula Malaysia. They have also been operating on Koh Lanta, Thailand as a PADI 5 Star Instructor Development Resort since 2009. Therefore, they have plenty of experience when it comes to offering the best quality service in scuba diving and scuba diving courses in Perhentian. Come find them on your next holiday, and they promise you a great time with really friendly people who will go out of their way to make your scuba diving experience in Perhentian Islands, Malaysia memorable.

Perhentian’s pristine shores lure many to enjoy a vacation under the warm sunshine, smooth sand and crystal clear waters. Taking a leaf from the Ministry of Tourism of the industry presenting abundant opportunities for local entrepreneurs, Ombak Resort was established as a centrepoint providing travelers with all that they need. Incorporated in 2011 with 3 entities, namely, Ombak Lodge, Ombak Café and Ombak Divers we specialize in meeting the comprehensive needs of travelers – a place to lay their bodies after a day of fun, a central point to nourish their stomachs and a hub for all things diving for deep-sea enthusiasts. They envision being a selected travel partner for tourists to islands in Malaysia mainly to Perhentian island through their accomodation services, as food & beverage provider and as an operator for everything related to diving and they are working towards it together with their people sharing the same foresight. First and foremost, “customers are their focus” and “service is everything” for them to desire for their experience at Ombak to be memorable because their “attitude affects everything”. “Respect others – have fun” represents the importance of acknowledging their co-workers or customers to create a harmonious environment. And they also believe in “profits for everyone” to create a sense of ownership and joy in carrying out their responsibilities.

Monkey Dives is Professional Dive Center located on Long Beach, Perhentian Kecil, Malaysia. Small place on Long Beach but you can feels like at home. The Monkey Dives team is a young, friendly and energetic collection of dive instructors from throughout the world. Handpicked because of their passion for the underwater world and first class knowledge and experience teaching people how to dive. Small group, personalized attention and a relaxed atmosphere are what we offer on a daily basis. From outstanding reefs to fantastic wrecks, our waters are warm and inviting the marine life abundant and friendly. We offer customized courses for couples, groups, and families, by arranging a diving package to suit your needs. Fresh breeze style Monkey Dives HQ is situated relaxing view close to the beach, a short walk from all the shops, restaurants, and bar. Cheers!

Universal diver is a stone’s throw away from the prestigious Tuna Bay Resort. They offer a wide range of diving services to cater for all your diving needs, so whether you are looking for daily swim fins or to take PADI courses, our team of friendly and knowledgeable staff will be more than happy to assist you. Awarded as an internationally renowned PADI 5 Star Gold Palm resort since 2007, Universal Diver caters to everyone from budding dive enthusiasts to seasoned underwater adventurers. What’s more, each dive trip can be fully customized, ensuring that you will receive a one of a kind experience each and every time. Not only do they offer diving at Perhentian Island, they also organize day trips to the beautiful islands of Lang Tengah and Redang. With such diversity, you can rest assured you are in for a truly remarkable diving experience. They are fully equipped with 3 customized dive boats, 40 sets of high quality MARES diving equipment, and a fully air-conditioned class room with a view of the ocean that will take your breath away. The comprehensive onsite facility is able to handle a total of 30 divers at any one time. The team of experienced international and local dive masters are fully qualified, coupled with their extensive knowledge of the island ensures that you are in safe hands at all times.

Angel Diver's main goal is to provide you with an amazing Scuba Diving experience, One that is educational and fully interactive with the marine life. Discover Perhentian in many different ways with the expert guided tours! The flexible operation allows them to dive on the best spots everyday. The dive guides have years of experience in Perhentian and are ready to provide you with an experience of a lifetime.

Sea Voice Divers is located in the heart of a little paradise known as the Perhentian Islands. The Perhentian Islands lie approximately 10 nautical miles off the northeastern coast of West Malaysia in the state of Terengganu. In less than 20 minutes by boat, you can be at some of the best dive sites the Perhentian Islands has to offer. The small dive centre runs PADI certification scuba diving courses from beginners to professional dive master level, marine education and conservation activities, accompanied scuba dives and scuba diving packages for groups as well as individual diver throughout the season. They also cater small groups and offer scuba divers a cozy family atmosphere you’ll never forget!

Located at the heart of Long Beach on Perhentian Kecil, Matahari Dive Resort is the perfect place from which to explore the Perhentians' rich and colourful dive sites. Newly established in 2008 and staffed by experienced professionals, the team will ensure you make the most of your stay on the island. From diving, snorkeling and accommodation to Internet and information, they'll be happy to help.

Situated south west coast of Pulau Perhentian Besar, where the guests get to reach through boat service. The visitors will find this picturesque The Barat Perhentian Beach Resort with all the required necessities of life and for your holidays. The Barat Perhentian is formed by the group of diving instructors and retirees in 2015. Ensemble with the fashionable designing and structure, the resort is constructed with the beach front chalet notion. They have designed the whole resort with the supreme idea of providing comfort, elegance, and home like treatment for our guests who have trusted this resort with their dream holidays. In The Barat Perhentian Resort, there are 3 Seaview Deluxe Room, 5 Seafront Chalet, 63 Chalets and Family Rooms, 1 Restaurant & Bar along with the dive center, Recreational Center & Health Therapy Center. The resort is an aspiration come true for the family outing, retreat, wedding functions, corporating, team building and for any such sort of event. Facilities in which you will find at The Barat Perhentian Resort are game rooms, seafront restaurant, PADI dive centre, water taxi (the charges will apply separately), a restaurant and a bar where you can have fun and relax alone or with your loved ones. If you are looking to enjoy the weather, then you can do it on spacious beach at the waterfront. They ensure about providing all the facilities to their quests so that they will make most of their good times while spending the time on the Perhentian Besar Island. For your superior hospitality, they facilitate their guests with the highest quality service.
✕