The SS President Coolidge is one of the most impressive wreck dives out there. The ship sank in 1942 and in 1983, the government of Vanuatu declared the wreck as part of its heritage.

Located not far from the beach, the site is protected by currents which makes it accessible to divers of different levels of experience.

Various openings allow divers to penetrate the ship. Inside, there are several rooms such as the engine room where one ca observe its huge boilers, or the smokers' lounge, the office, and the infirmary.

There are also many objects which can still be found. Military trucks and equipment can be seen in the front holds.

The wreck is covered in corals and sponges. There are also many species of fish swimming around and inside the SS Coolidge. One can spot barracudas, lionfish, groupers, moray eels, angelfish, leaf fish, sea turtles, sea horses, among other many species of fish. 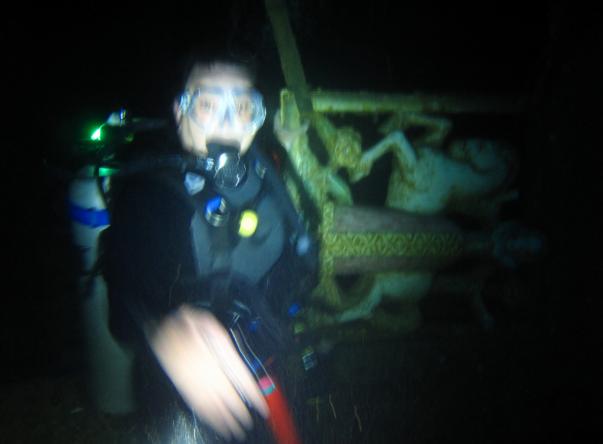 Aore Adventure Sports & Lodge is owned and run by Paul and Lyndel who moved to Aore Island, Vanuatu after selling their businesses in 2012 on the Sunshine Coast Queensland.Prior to moving to Vanuatu, Paul and Lyndel owned and operated one of Australia’s most successful dive centres – “Sunreef Scuba Diving” in Mooloolaba Queensland for 12 years along with their popular Supermarket & Deli at Alexandra Headland.They have been diving in Santo since 2003 and set up their own Dive operation on Aore Island in 2012. Lyndel and Paul offer a comprehensive, no fuss, tropical island holiday for families and small groups where you can enjoy modern waterfront accommodation with your own private sandy beach. Fill your days with fun, safe, exhilarating water sports and activities. There is something for everyone in the renowned tropics of wonderful Vanuatu regardless of age or fitness.Aore Adventure Sports is a registered PADI Dive Facility # S-23490 offering the highest service & standards in the dive industry. Paul is a qualified Padi Master Scuba Diver Trainer #468105 and also holds instructor ratingsfrom TDI, SDI & PADI Emergency 1st Aid.All Aore Adventures staff are local to Aore Island or Santo and our head dive guide Alfred Niko AKA “Alfred #1” is the most experienced guide in Vanuatu, diving since 1992 with over 13,500+ dives on the SS President Coolidge alone! He is also a qualified Padi Dive Master #499050. Alfred’s son Sethy, also acts as a guide with us and has over 2500+ dives on the wreck.

Opened in early 2017, Pacific Dive has quickly become the most well-known and trusted Scuba Diving Shop in Luganville. What started out as a hobby has now become our passion and we're delighted to share it with you. We’re proud to have produced lots of happy customers and look forward to continuing our work for years to come! Our love for our Scuba Diving Shop drives who we are and what we do. Every. Single. Day. Great service begins with great people and industry experience, which is why our staff are only the best and most qualified in the business. We’re a team of dedicated personnel with a genuine desire to ensure that your experience with us is easy, satisfying and safe.

Absolute Adventures, based at Coral Quays Fish & Dive Resort cater for all your diving needs. From the first introductory dive to advanced technical instruction, we love it all! Absolute Adventures pride ourselves on being the most professional and safest dive facility on Espiritu Santo. We are the only operator to offer both shore and boat diving around Espiritu Santo. Whatever type of diving you are looking to do; we can do it. Absolute Adventures has state of the art air, nitrox and trimix blending facilities with a nitrox membrane system bringing you an unlimited supply of affordable nitrox for all your diving; We offer the best value nitrox and trimix on Espiritu Santo. Absolute Adventures is backed up with high quality scubapro rental equipment serviced and maintained by our in house scubapro service technician. All of our vessels are set up with safety equipment, emergency oxygen and first aid kits operated by qualified professionals. Safety is paramount to us here at Absolute Adventures. We can combine fishing, diving and snorkelling to make the most of your holiday adventures. We offer transfer shuttles to and from resorts on Santo so please enquire.

If you want to dive the most famous wreck in the world, the SS President Coolidge then COME WITH US We provide the best service, the best dives and the biggest smiles We also specialise in wreck and reef diving offering a variety of previously unexplored reefs and walls that will give you the opportunity to experience the huge diversity of the marine environment in Vanuatu From leisurely drift dives to exploring offshore bombies and wrecks, all accompanied by qualified staff and local Ni Vanuatu guides rich in local culture Your memories of Vanuatu will never be forgotten Santo Island Dive and Fish take pride in our friendly service, unique dives and local indigenous knowledge.

Drag the red marker or modify the GPS coordinates below
GPS Coordinates
Get inspired checking out other dive sites in: melanesia , vanuatu , sanma , pacific ocean
✕