South Padre Island is a barrier island that allows you to experience the closest thing to a tropical destination in Texas. With 54 km/31 mi of white sand beaches and clear water, it is home to many water sport activities such as fishing, kiteboarding, snorkeling, and scuba diving. 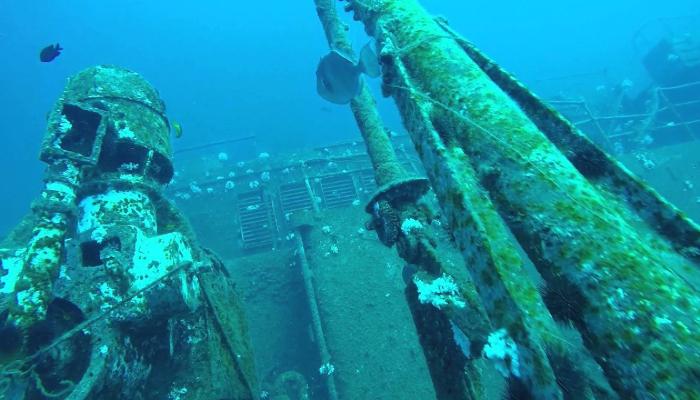 The island’s natural reef won’t sweep anyone off their feet, although you will see several species of mollusks, crustaceans, sponges, and tube-building worms. What divers come here for are the numerous artificial reefs – shipwrecks and decommissioned oil rigs.

The dive season at South Padre Island runs from March to October. The best diving conditions are found from June to September.

Underwater visibility can be anywhere between 3 to 30 meters (10 and 100 feet), depending on the location and water currents.

Seven and One-Half Fathom Reef is the best reef dive of South Padre Island. The reef contains quite a variety of marine life. But due to the converging currents, however, visibility can decrease dramatically at times. At less than 13 meters (45 feet) deep, this spot is open to divers of all levels.

This former WWII troopship was sunk as an artificial reef and now lies on its side. The ship is 144-meter-/473-foot-long and its upper parts are located at a depth of about 18 meters (60 feet). However, the bottom sits in water 41 meters/135 feet deep, which is why the wreck is usually dived by advanced divers.

Espíritu Santo (“Holy Ghost”) is a wooden vessel wrecked in 1554 and discovered in 1966. The remains of this very old ship are found near Port Mansfield. The artifacts have long been lifted from the wreck, and they include one gold bar, a small solid-gold crucifix, several silver discs, crossbows, cannons, and three astrolabes. Today, there’s not much to see at this site but it remains a popular dive due to the age of the vessel.

This is a decommissioned oil rig that rises from a depth of about 73 meters (240 feet) and peaks at about 27 meters (90 feet). The area sees quite a few pelagic species such as hammerheads, silky sharks, and amberjacks. Technical divers only.

As the name suggests, this is another artificial reef. These remnants of old oil rigs are located within recreational limits, but both oil rigs are found at depths of more than 30 meters (100 feet), so you will still need to be an advanced diver to explore this site. The site is teeming with small and medium-sized fish.