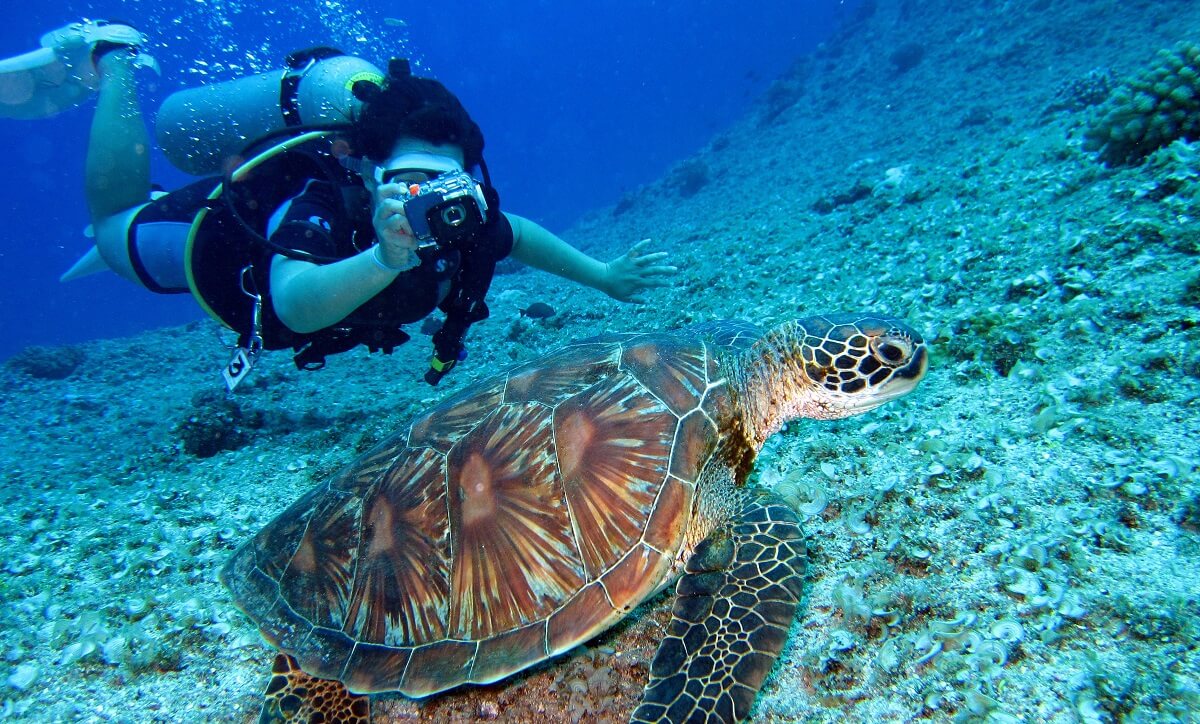 About 71 percent of the Earth’s surface is covered with water, most of it found in oceans. There are thousands and thousands of spectacular diving locations throughout the Globe. It would take a few lifetimes to explore them all, so we’re always looking for ways to discover those that are most worthy of our attention.

Picking the best scuba diving in the world was no easy task but at the end of the day, after debating over the most memorable of all experiences, we’ve settled on these ten spots. From some of the most diverse ecosystems in the world to eerie underwater caverns, here are our favorite diving locations for blowing bubbles.

Located off Darwin Island, the northernmost island in the Galapagos archipelago, Darwin’s Arch is a haven for those who want to swim alongside large aquatic animals. It comes as no surprise that this area is considered one of the greatest marine wonders of the world.

The epicenter of the site is the arch, a natural rock that sits above the surface of a flat plateau. Strong currents wrap around the dive site and from June through November the presence of the Humboldt Current is felt the strongest. During this period divers get to experience sightings of whale sharks along with the regular schools of marine animals.

Located off the island of Kri in the province of West Papua, this is one of the most remote dives in Indonesia. The crossroads of currents at the tip of the Island of Kri has turned Cape Kri into a dive site of incredible variety of underwater flora and fauna. The pristine waters are home to untouched reefs and unique marine life, with new species continuously being discovered.

The reef is a sloping wall passed by schools of fish daily and at the base of the reef, at a depth of 38 meters (124 feet), lies a snagged anchor. Among the attractions it’s also worth mentioning a spot called The Passage that experiences very strong currents and it’s suitable for divers with at least 50 logged dives.

Note that Raja Ampat is a designated marine biodiversity park and divers must purchase a permit to visit the area. This helps fund the conservation efforts in the area. The permit is valid for one year.

Also known as Punt’i Piku, Barracuda Point is located off the coast of Sabah, Malaysia. Teeming with life, it is without a doubt one of the best dive sites in the world, home to over 3,000 species of fish and an abundance of corals. Dozens of fish patrol the area, and divers may find themselves in the middle of a swirling vortex of barracudas and jacks.

The dive follows a vertical wall rich with gorgonians, black corals and soft corals of all shapes and colors. The wall levels out into a sloping plateau covered in Elandshor corallus and Hersthoorn corals that offer excellent opportunities for underwater photographers.

Note that visitors require a permit for diving and snorkeling at Sipadan Island. The number of permits is limited to 120 a day, divided across 12 tour operators.

Dirty Rock is one of Cocos Island’s most impressive rock formation. It’s a sheltered channel featuring rock pinnacles and volcanic boulders rising above the waves. And in case you were wondering where Dirty Rock gets if unfortunate name, its appearance is the result of sea birds bombarding the rocks with guano.

This site is considered one of the top dive sites in the world due to the large number of hammerhead sharks and impressive biomass of fish that inhabit these waters. Towards the island’s pinnacle there’s also small cave full of marine animals like lobsters, turtles, eagle rays, and octopus.

Located northwest of Ngemelis Island, Blue Corner is a world-famous dive site that offers an adrenaline-fueled experience. With currents that can get extremely strong and that change direction at any moment, it’s not a dive for anyone. In fact, the story goes that the reef hook was invented in Palau.

This underwater promontory of 15-20 meters is a true wonderland that provides the perfect vantage point for the witnessing marine life on the reef. As one drifts across thousands of species of coral, a miriad of aquatic animals can be observed. The reef abounds in hundreds of species of reef fish, from the tiny nudibranchs to large creatures like sharks and whales.

Monad Shoal, or Thresher Shark/Shark Point, is one of the best dive sites in the world – if not the ultimate one – to see the timid thresher sharks. Located off Malapascua Island in the Philippines, Monad Shoal is actually an underwater island rising from a depth of 200 meters (656 feet) and terminates at 15 meters (50 feet) below the surface.

Thresher sharks are shy creatures, but they come here early in the morning to the cleaning station. And while there are no guarantees of seeing the sharks on a first dive, diving at Monad a few days in a row increases the chances of encountering them several times.

The thresher sharks are not the only attraction at Monad Shoal. After dropping over the edge of the plateau, divers can spend hours observing the biodiverse reef wall made up of a multitude of species of soft coral, some so large that one can easily hide behind them. The wall also features crevices that shield small fauna like shrimps and nudibranchs.

The Aquarium is the macro dive site off Socorro Island, Mexico. This spot is one of the unmissable dives of the island; from offshore, divers can admire and get close to whales. Socorro Island is actually one of the few places in the world where one can dive with humpback whales.

Visiting The Aquarium does not come without challenges. The location is accessible only through liveaboards that usually run during the high season of November to May. During this period, the large aquatic creatures that inhabit these waters are plentiful.

The USAT Liberty was a cargo ship that sank off Bali’s northeast coast in 1942, after being torpedoed by a Japanese submarine. Today, the ship is regarded as one of the best wreck dive sites in the world, beaming with marine life – from colorful reef fish to sea turtles.

The ship was taken over by a variety of species of soft and hard corals, gorgonians, sea fans and other underwater flora.  And while the 120-meter-long structure is disintegrating, it is still possible to swim into some of the large cargo holds. Divers can still observe the bow, guns, and anchor chain of the wreck.

The Pit is a spectacular dive site located in the jungle between Tulum and Playa del Carmen. This incredible sinkhole is one of the deepest cenotes in Quintana Roo. At the surface, an oval-shaped opening leads way to a cylindrical cavern with an overhang of stalactites, opening to another cavern rimmed with large stalactite and stalagmite formations.

Sun rays penetrate to the depths where they meet a cloud of hydrogen sulfate, creating an eerie atmosphere. As one dives further into the depths, they go into a thick white fog that creates a feeling of weightlessness. The Pit truly is one of the most surreal and spectacular dives in the world.

Found off the west coast of the Sinai Peninsula, the SS Thistlegorm is one of the best-preserved wrecks in the world. Now measuring 150 meters in length, the ship lies upright on the sandy seabed where divers can expect to see much of the cargo, motorcycles, cars, locomotives, anti-aircraft guns, and other remains from its past.

Due to its long time underwater, the upper deck is now encrusted with beautiful coral formations. The hull is where lionfish and schools of sweetlips take shelter from the current, and as one makes their way up across the top of the SS Thistlegorm, the waters become abundant in different species of fish that roam the area unperturbed by the familiar divers.

Has your favorite diving site made it on our list? Where have you experienced the best scuba diving in the world? Share your thoughts in the comments below!