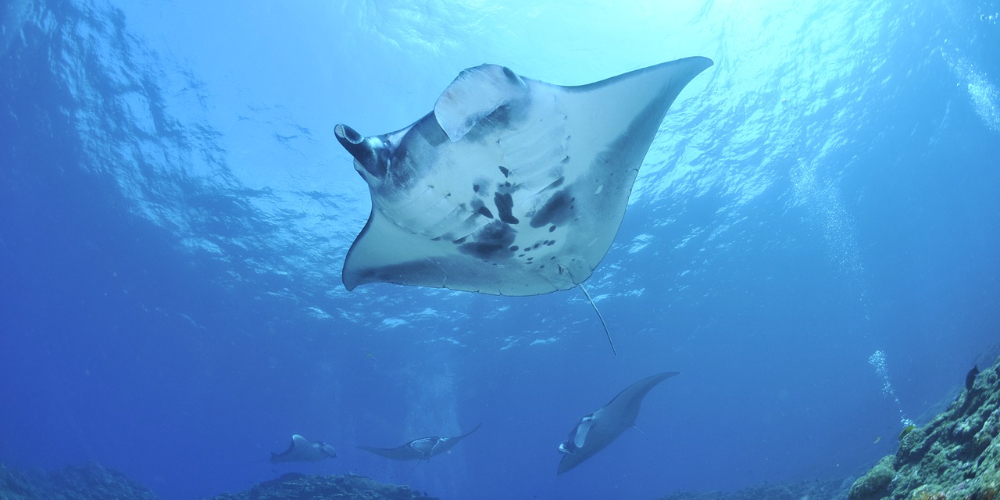 Few experiences top diving with some of the gentle giants of the sea: the manta rays. It is estimated that tourists spend millions of dollars each year to see the creatures in the wild. Sustainable tourism is considered part of the solution to combating the issue of global manta fisheries. Many governments are now protecting the vulnerable manta rays, including the nations mentioned below. Those who dream of snorkeling or diving with the giant fish will find that some locations offer far greater chances of encounters than others. Here are some of the best places in the world where you can dive with manta rays.

Where Do Manta Rays Live?

The term “manta ray” is used when referring to the two species of fish that belong to the genus Manta: the reef manta (Manta alfredi) and the giant manta ray (Manta birostris). Both species are pelagic, but each has a specific distribution.

The reef manta can be seen in the tropical and subtropical waters of the Indian and Pacific oceans, but its distribution is not continuous and there are areas where the chances of seeing the species are close to none. Smaller populations may also be seen in the Atlantic Ocean, but sightings are rarer.

The giant (or oceanic) manta ray can be spotted in the tropical and temperate waters of the Indian, Pacific, and Atlantic oceans, but sightings are less frequent than those of the reef manta ray. They are a slightly more migratory species compared to their reef relatives, moving across the ocean and regularly visiting cleaning stations.

Where to Dive with Manta Rays

According to known data, Ecuador is home to the largest population of giant manta rays, visiting the area in hundreds during their season. Manta rays come here to feed, mate, and get cleaned by the cleaner wrasses. The reef manta ray is a resident of the area, so divers can observe them throughout the year.

Isla de la Plata is the ideal destination for spotting manta rays in Ecuador. Those who have dived in Isla de la Plata have reported encounters that lasted up to 15 minutes. Sightings are also guaranteed in the Galapagos archipelago during the manta ray season. Giant manta rays can be seen off Wolf and Darwin islands and the stretch of water between Santiago Island and Sombrero Chino islet.

The Maldives is the perfect destination for sightings of manta rays (primarily reef manta rays), with three atolls standing out as the perfect locations. Addu Atoll is an exceptional diving destination because it offers real chances of spotting manta rays year-round. What’s more, the atoll is somewhat of a hidden gem still, with not as many accommodation facilities and less touristy than the rest of the atolls.

Baa Atoll is another great place to see manta rays, with up to 200 manta rays reported feeding in the Hanifaru Bay in season. The atoll is home to one of the largest manta ray aggregations in the world.
South Ari Atoll is mostly known for the resident whale sharks and while it offers fewer chances of spotting manta rays, it remains a good destination granted you visit during the season.

The Hawaiian Kona coast is home to over 240 manta rays, all resident to the area, and each individual ray has been identified and named. All manta dives here are night dives, as the lights shone by the divers in the Makako Bay attract plankton which in turn attracts dozens of manta rays that come to feed on it. The manta rays seen during these night dives are all resident to the area and show up almost daily for their feeding. The chances of manta ray sightings off the coast of Kona are up to 85% throughout the year.

Kohala is the northernmost spot on the Big Island where divers can see manta rays. Sightings here are less frequent, but it does offer the advantage of being far less touristy and crowded than Kona.

The Komodo National Park is one of the best places in Indonesia for diving with manta rays, offering encounters with both species. The two main cleaning stations in Komodo where mantas gather to get cleaned up and eat the plankton are Makassar Reef and Mawan Reef, but the northern part of the park offers even greater chances of seeing the rays.

The manta reefs found in Raja Ampat are unique in the way they look, as the reef mantas here have a dark color on both sides, not just on the top. Therefore, they are known as black mantas. The animals migrate here from late October to April, but there are chances of spotting them during the offseason as well.

In Nusa Penida, the resident reef manta rays can be seen throughout the year. The region is also one of the most accessible places to visit, in close proximity to Bali (often the base for visitors of Nusa Penida). The animals found here measure three to four meters in length and can weigh up to one tonne.

It’s a known fact that the Revillagigedo archipelago is home to a plethora of large pelagic species. Giant manta rays are the main attraction here and they can be seen throughout the year in the waters surrounding Socorro Island. According to many dive operators, the manta rays present in the area are friendlier and more curious than others. They seem to be enjoying the presence of divers, hovering over them, most likely confusing the bubbles made by the divers with the gentle nibbling of the cleaning clarion angelfish.

The pristine island of Yap in the Pacific Ocean is one of the few places in the world where divers can encounter giant manta rays on any day of the year. The mangroves surrounding the island provide rich plankton for the manta ray population. Yap has a resident population of rays and a number of shallow cleaning stations that are regularly visited by the mantas year-round. They are also frequently seen on drift dive sites transiting channels and occasionally in the outer reef deep blue water. The resident manta rays are found along the Mi’l Channel from November to May and Valley of the Rays from May to November.

For those based in Europe, the Azores stands out as an accessible destination for diving with manta rays in the Atlantic Ocean. The giant mantas and mobulas of Princess Alice, a mid-Atlantic seamount off Pico Island, are found in large numbers here and their curiosity and sociable nature ensure an unforgettable experience.

Another seamount of great interest to scuba divers is Dollabarat Bank in the Formigas Islets which receives a plentitude of different pelagic species, including huge oceanic manta rays. Neither site is suitable for novice divers and while their remoteness may hold one back, those who venture here will experience some of the best dives in the Atlantic Ocean.

Mozambique is renowned for its megafauna, with manta rays and whale sharks prowling on the high concentration of plankton throughout the year. The most popular diving destination within the country is without a doubt Tofo which lies in a stretch of water known as The Manta Coast. The area is aptly named, as most of the deep dive sites here have cleaning stations frequented by both reef and giant manta rays. Here, divers can observe the large creatures up-close for extended periods of time. Tofo is also one of the few places in the world where both species can be observed at the same dive site.

There are two hotspots for manta rays in Australia, both located south of the Great Barrier Reef: Lady Elliot Island and North Stradbroke Island. Known as the Home of the Manta Ray, Lady Elliot Island offers sightings of manta rays throughout the year, but their number peak during the Australian winter. The species you can encounter here is the reef manta ray that travels long distances across the coast within a few months. Outshined by Lady Elliot when it comes to the number of rays you can see here, the North Stradbroke Island is nonetheless a good place to spot the creatures during the Australian summer which coincides with the mating season.

It may come as a surprise that we’ve included Peru on our list of places where you can dive with manta rays, but the reason is somewhat obvious. Scientists have discovered that the large populations of manta rays that frequent the waters of Ecuador end up migrating to Peru, dragged by the currents.

Still a hidden gem, with a small number of dive outlets and underdeveloped coastline, this does not take away from the fact that Peru’s northern waters are home to one of the largest populations of giant manta rays. The rise of marine ecotourism within the country is changing attitudes among the local fishermen. Nowadays, more and more boats are taking tourists to get a glimpse of the rays rather than nets to catch them.

Regardless of where you are in the world, there are a few rules you need to follow to interact with the mantas in a sustainable way:

Did you know that each individual manta ray has a unique pattern of spots on its belly? This pattern remains almost unchanged throughout their lives, so it’s safe to say it’s the equivalent of the human fingerprint. Scientists identify the mantas by photographing their bellies (ventral surfaces) which allows them to document their movements and estimate the size of the population.

Anyone, including divers, can upload clear pictures of the animal’s ventral surface to learn more about the individual manta they saw (if it matches with an existing one) or to add a completely new animal to the database. While it may seem like a small thing to do, this piece of information you could provide will help those involved in the protection of the species make informed management decisions regarding the conservation of the manta rays.