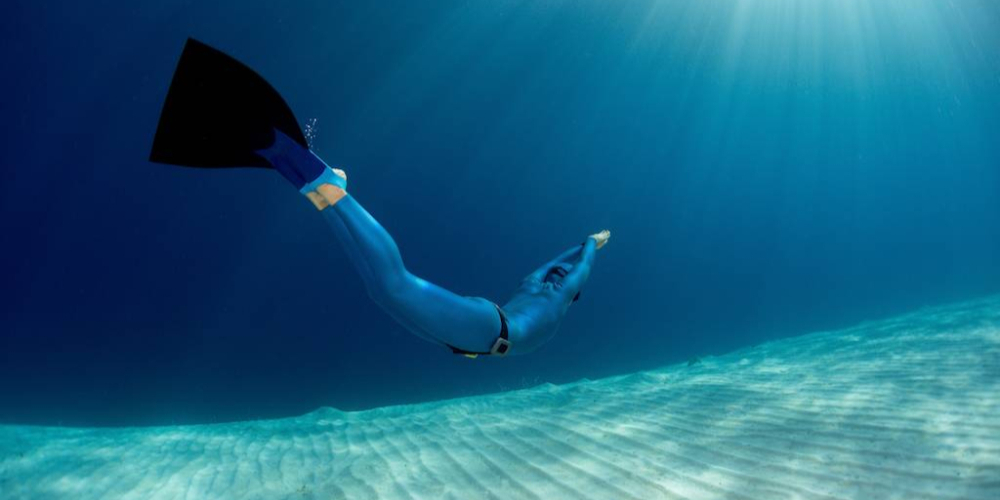 Each year, an increasing number of “superhumans” attempt new freediving records. These amazing achievements do not come without risks and many have lost their lives in the pursuit of their dream. We’ve gone over the current freediving records recognized by the Guinness World Records organization to discover some of the bravest men and women on Earth who are willing to risk it all to be the absolute best at their discipline.

The world record for the deepest no-limit dive by a male is held by Austrian freediver Herbert Nitsch who dived down to 214 meters (702 feet 1.18 inches). The dive took place in Spetses, Greece, on June 14, 2007. Nitsch used a weighted sled to descend and a buoyancy device to ascend. The freediver can hold his breath for more than 9 minutes and has set more than 30 diving records.

Nitsch, who is known as “the deepest man on Earth”, tried to beat his own record in 2012 in Santorini, Greece. Although he did reach the record depth of 253.2 meters (831 feet), the freediver lost consciousness on the way back to the surface due to narcosis, which meant his new record could not be recognized. The fateful event left Nitsch with severe neurological damage that required months of medical treatments. Fortunately, the diver managed to make an impressive recovery over the years but was left with balance and coordination problems.

The record for the deepest no-limit dive by a female is held by world champion freediver Tanya Streeter from the United States. Streeter reached a depth of 160 meters (524 feet 11.2 inches) in the Turks and Caicos Islands on August 17, 2002. The freediver performed ten training dives in the last three weeks prior to her record-breaking dive. For her dive, she used a weighted sled to descend and after reaching her target depth, she inflated a lift bag to return to the surface.

The world record for the deepest dive in the constant weight discipline by a male is held by Russian freediver Alexey Molchanov. He dived to a depth of 130 meters (426 feet 6 inches) at Dean’s Blue Hole in The Bahamas on July 18, 2018, beating the previous record – his own – by one meter. Alexey is the son of the late Russian champion free diver and multiple world record holder Natalia Molchanova.

Alexey Molchanov also holds the record for the deepest dive in the free immersion discipline. The freediver reached the incredible depth of 125 meters (410 feet 1 inches) without the use of propulsion equipment. The record-breaking dive took place on July 26, 2018, at the Vertical Blue freediving competition at Dean’s Blue Hole, The Bahamas.

The female record holder for the title of deepest dive in the free immersion discipline is the late Sayuri Kinoshita from Japan. The multi-champion dived to a depth of 97 meters (318 feet 2 inches) at Dean’s Blue Hole on July 26, 2018, at the Vertical Blue freediving competition. Sayuri Kinoshita sadly passed away following a non-diving accident on July 15, 2019, which is also Japan’s National Ocean Day.

The world record for the deepest dive in the constant weight without fins by a male is held by New Zealander William Trubridge. On July 20, 2016, the freediver swam to a depth of 102 meters (334 feet 7 inches) at Dean’s Blue Hole in The Bahamas with no propulsive assistance. Trubridge holds multiple world freediving records and is the main subject of a 2011 documentary entitled Breathe. In 2019, Trubridge became the first person to complete a channel crossing by swimming underwater.

The deepest freedive under ice was recorded on March 27, 2019, when New Zealander Anthony Williams plunged into a frozen fjord in Kirkenes, Norway. The freediver achieved a depth of 70.3 meters (230.643 feet) on a single breath and using just a pair of fins. The dive lasted 2 minutes and 29 seconds, but it took the team a full day to cut out a hole in the thick ice so Williams could go into the freezing water. The diver described the visibility as “looking into an oil slick” because of the complete absence of sunlight.

The world record for the largest number of people simultaneously freediving was broken on October 1, 2019, by the Maldives as part of the World Tourism Day 2019 celebrations. A staggering number of 580 freedivers, including world champion William Trubridge, participated in the event. The dive, which took place at the lagoon area of Baros Island, was also joined by the Maldives’ President Ibrahim Mohamed Solih who remained underwater for about 30 seconds.

These are just a few of the world freediving records that prove there are no limits when it comes to what the human body can do. It won’t be too long now until we’ll see new changes in the list of freediving world records, with new record-breaking attempts happening constantly.