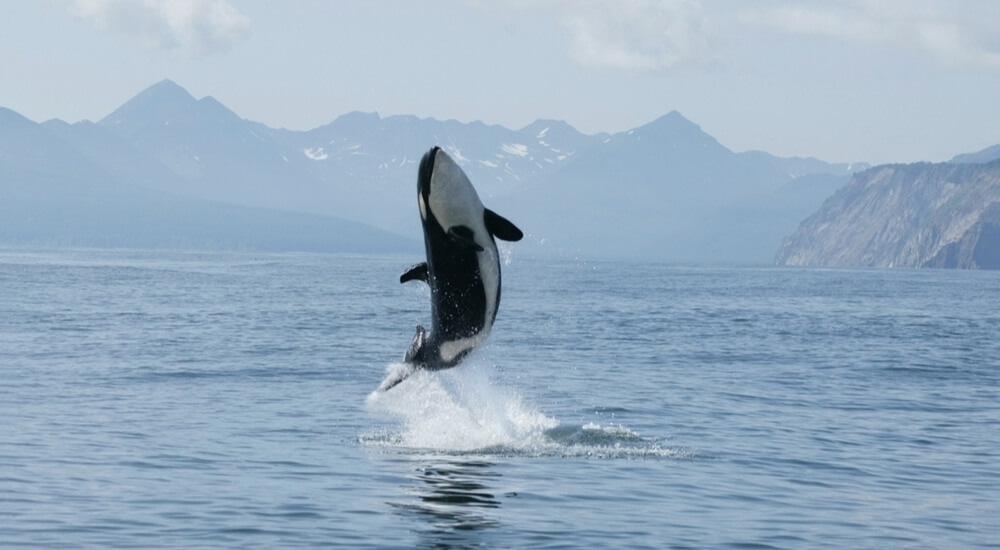 Seeing the killer whales in their natural environment, where they belong, can be a thrilling experience. Getting up close with these massive creatures is still possible in some parts of the world and admiring them in their natural habitat is the only respectful form of interaction. Learn more about these fascinating marine animals and where to go diving with killer whales.

A Whale that’s actually… a Dolphin

First off, let’s establish what a killer whale, or orca, is. Some may be surprised to learn that these marine mammals we commonly refer to as whales are, in fact, dolphins! Orcas (Orcinus orca) are part of the family Delphinidae, a family of dolphins that include several large-sized species whose common names may contain the term “whale” rather than “dolphin”. Another example is the pilot whale.

Orcas share many of the physical characteristics of dolphins but also have a few unique features of their own. They have a distinctive color pattern made up of areas of black and cream or white colors. The dorsal part of the killer whale is black while the ventral areas are mostly cream or white. Seen from above, the black gets mixed with the dark ocean and seen from below, the lighter parts blend in with the sunlit water. The orca’s prey may not recognize the large animal until it’s too late.

Male orcas have the largest dorsal fin in the marine mammal world, reaching a height of up to 1.8 meters (6 feet). The dorsal fins are made up of dense connective tissue and a network of veins that help the animals regulate their body temperature. But what really makes it obvious that the killer whale is more related to dolphins rather than whales is its compact body with a head that curves to the front, a characteristic we see in most species of dolphins and it’s what allows them to move effortlessly in the water.

Why Are Orcas Called Killer Whales?

Part of the reason why orcas get a bad rap is that they are also known as killer whales. The name was given by ancient Spanish sailors who observed the orcas’ hunting and eating other species of whales. They called the orcas “asesina ballenas” which actually means “whale killers”. With the passing of time, the name was flipped to “killer whales” which does sound a bit more frightening, as it may suggest that they kill pretty much everything in their way. However, they are far from being the vicious killers the ancient sailors thought them to be.

Where Do Killer Whales Live?

Killer whales can be found in all of Earth’s oceans, but most prefer the cold waters of Antarctica, Alaska, Canada, and Norway. Orcas have also been spotted in the warm waters off the coasts of the Bahamas, Hawaii, Florida, Galapagos, New Zealand, New Mexico, and South Africa. What’s more, while it is commonly assumed that they inhabit the deeper parts of the ocean, orcas have also been seen for extended periods of time in only a few meters of water.

Killer whales are typically categorized as resident, transient, and offshore. Resident orcas as named so because they tend to stay within a small home range. Transient orcas, on the other hand, travel frequently over large distances. Offshore orcas live far from land and are rarely encountered, but they seem to be smaller than their counterparts.

What Do Killer Whales Eat?

Killer whales were thought to be monotypic, but many biologists now believe that there are multiple subspecies of killer whales. This may explain the differences in their habitat and diet. Orcas are apex predators with no natural enemies. In fact, they are the only known predators of the feared great white sharks. Their diet includes fish, squid, seals, other species of whales, and even sea birds.

The killer whale’s diet may depend on what is available where they live, but some show certain preferences. For example, several orcas in North America are specialized in hunting sea lions and seals, and in South America, the killer whales deliberately strand on the shores to catch the sea lions found on the beach. At the shores of California, attacks on the great white sharks have been observed quite often. The orcas off the coasts of Canada and Norway, however, eat mostly fish such as salmon and herring.

While there are numerous places around the globe where orcas can be found, one destination stands out among the rest as the best place to see killer whales. What is believed to be the largest gathering of killer whales in the world takes place every year between October/November through January off the northwestern coast of Norway, where the orcas migrate in hundreds. The mammals visit the area to feast on the millions of herring that make their way into the waters from the beginning of October until spring.

Diving with killer whales is possible on the whale watching expeditions where freediving and snorkeling are permitted. Norway is one of the very few places in the world where it is possible to share the water with orcas. Scuba diving – or any other form of interaction, for that matter – with killer whales is outlawed in many parts of the world. These animals don’t really enjoy the presence of noisy bubble makers and may bolt away. However, scuba divers have reported sightings of lone orcas or small pods while diving in various locations across the globe such as Poor Knights Islands, New Zealand, and Playas del Coco, Costa Rica, just to name a few.

Killer whales are known to be quite friendly creatures – just as long as you’re not what they usually have on their “plate”, that is. There is not one single record of a killer whale attack on a human in the wild. Orcas have never bitten a human in the wild and seem to have no interest in learning what human meat tastes like. And despite seals being a major part of their diet, no cases of mistaken identity – as we know happens with great white sharks – have been recorded so far.

In captivity, however, there have been several non-fatal and fatal attacks on humans (mostly on trainers). Nonetheless, it is not always clear if the injuries or deaths were accidents or deliberate attacks. Four people have died due to interactions with captive killer whales, and three of these deaths have been linked to a male orca named Tilikum. Scientists believe that killer whales kept in captivity suffer psychological damage that causes them to become unnaturally aggressive.

As highly social animals, orcas depend upon social relationships for proper neuroanatomical development and to main their mental health throughout their life. Killer whales have a prolonged period of maternal dependence after birth; the calves rely upon their female relatives within their pod for the development of essential life skills, including skills that contribute to their long-term psychological health.

Wild-born orcas are often taken into captivity as young calves. This results in the severing of the vital maternal and family bonds upon which they depend for their development and proper health.  Captive-born orcas are also deprived of a healthy social environment and suffer early-life traumas that are associated with a lack of social competences and maternal success.

The Future of the Killer Whales

While other cetaceans are facing an uncertain future because of the decline in their population, killer whales are not considered an endangered species. The Red List of the International Union for Conservation of Nature (IUCN) classifies orcas in the “Data Deficient” group. However, figures show that, in reality, some orca populations are already threatened. Along with natural dangers such as bacterial infections, a number of threats originated by human activities such as commercial hunting, capture for entertainment, pollution, climate change, and food shortages have and can further lead to a decline in their population.

Through whale watching, both developed and developing countries have managed to generate income and employment in coastal communities while educating people on the importance of orcas and their role in our ecosystem. As such, observing and diving with killer whales in their natural environment remains the safest and most sustainable way of interacting with them, provided the tourist vessels follow the strict regulations imposed by local governments and organizations.