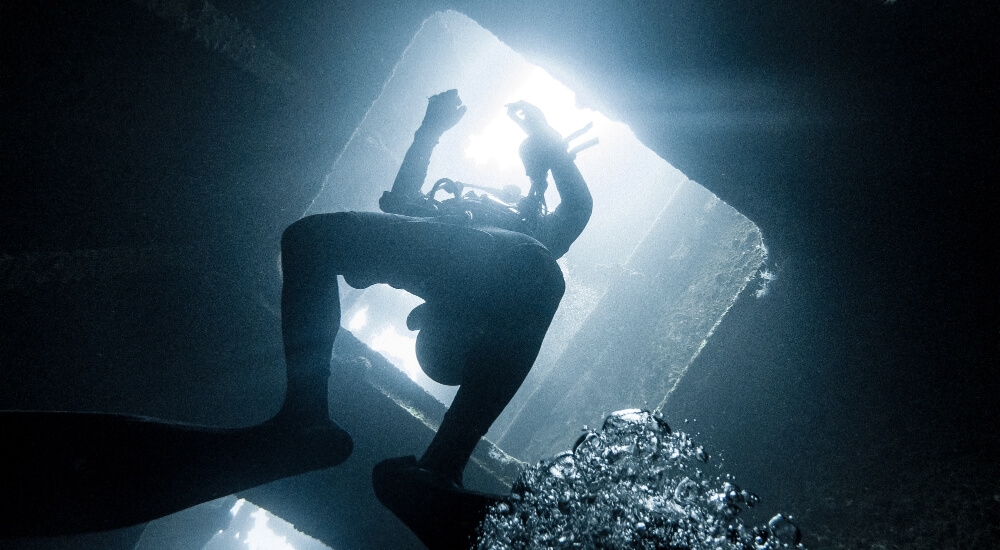 We’ve already dived into the natural world with our favorite ocean documentaries and showed you some of our top picks for scuba diving movies, so what’s next? Oh, right, we still haven’t gone over the great scuba diving documentaries that will captivate just about any type of diver.

Monty Halls is a British TV broadcaster and marine biologist known for his BBC documentary series. He has led numerous scuba diving expeditions, including work for marine conservation charity Coral Cay Conservation. In 2003, Halls’ hard work on multiple remarkable expeditions earned him the Bish Medal for services to exploration, granted by the Scientific Exploration Society, the longest-running scientific exploration organization in the world. His work in television is incredibly diverse, but what caught our interest is – as you’d expect – his scuba diving documentaries.

In his 2013 series Dive Mysteries, Monty tries to solve some of the mysteries that have baffled scuba divers worldwide. Why has Egypt’s Blue Hole claimed the lives of so many divers? Could it be the vengeful spirit of a dead girl that lurks these waters, as the superstitious locals say?
Does a Japanese Atlantis really exist or is it just a natural rock formation? How did the Mary Celeste wreck go unnoticed for over 100 years and how come the sailors who had been on board were never heard from again? Lastly, is there a safe full of German gold coins in a deep sinkhole in the Namibian desert? I guess you’ll just have to watch to find out.

Featuring Kenneth (Kenny) Broad, Extreme Cave Diving gives us a taste of the dangerous but fascinating world of diving in water-filled caves. Broad, who is National Geographic’s Explorer of the Year for 2011, is an anthropologist, ecologist, and experienced scuba diver. He pursues extreme sports not only for the thrill of it but also to gain valuable insight that helps him solve real-life involving climate change and freshwater resource management.

Extreme Cave Diving follows Broad and his team of scientists and cave divers as they explore the underwater caves of the Bahamas. It is not only an eye-opening scuba diving documentary that shows the numerous dangers of cave diving, but also one that gives insight into the history of these natural formations that were once inhabited by land animals millions of years ago, before the rising sea levels.

This documentary film from 2019 relates the story of a saturation diving accident that occurred in September 2012, when commercial diver Chris Lemons became trapped on the ocean floor with only a small amount of breathing gas available.  Lemons, along with his colleagues David Yuasa and Duncan Allcock, were carrying out repairs some 100 meters, or 330 feet, below the surface of the North Sea, when the dynamic positioning system failed and Lemons’ umbilical tether eventually became severed.

Although the diver was left with only a few minutes worth of breathing gas, he somehow managed to survive for about 30 minutes, when his team was finally able to pull him back aboard the diving bell. The story is nothing short of dramatic, as we see the diver’s fight for survival in one of the most dangerous work environments.
Last Breath uses genuine footage and audio recorded at the time of the accident and well-made reconstructions, and feels almost like a survival thriller movie.

Diving into the Unknown

Continuing on the same note, Diving into the Unknown follows a breathtaking recovery mission. The documentary tells the story of four Finish divers that set out on a secret mission to recover the bodies of two lost friends deep inside an underwater cave in Norway after the official recovery mission was called off by the Norwegian and British authorities due to the dangers involved.

Despite this, the four fearless friends were successful in their attempt to swim through the cave and retrieve their loved ones. The Norwegian police did not press any charges against the divers.
The film contains footage from the accident and multiple cameras used for filming their unofficial recovery mission. Diving into the Unknown not only gives insight into the risks of cave diving, but also tells a story about friendship and the psychological tolls this kind of accident has on the survivors.

Return to the USS Atlanta

The USS Atlanta was designed to provide anti-aircraft protection for the United States Navy and served in the naval battles Midway and the Eastern Solomons. The ship was heavily damaged by the Japanese Army on 13 November 1942 during the Naval Battle of Guadalcanal and was sunk under her captain’s orders on the same day. The wreck was discovered in 1992 but few dives have been conducted on the USS Atlanta due to its depth and strong currents.

In the documentary film Return to the USS Atlanta, we see a group of GUE technical scuba divers traveling to the Solomon Islands to dive the USS Atlanta, located at a depth of 130 meters, or 426 feet – a challenging dive even for the most experienced diver. Through the voices of the divers, historians, and even veterans who served on the ship, we learn fascinating facts about the final hours of the USS Atlanta and the harrowing drama of war.

Speaking of scuba diving documentaries involving shipwrecks, Deep Wreck Mysteries is a docuseries that talks about Britain’s vast underwater heritage. Thousands of World War vessels lie wrecked off the shores of Britain and Ireland, many too deep to reach. Among the wrecks are some of the largest ships – from huge battleships to ocean liners. During the course of eight episodes, the team of technical divers, including elite camera crew members operating at great depths, brings to the screens the intriguing mysteries of historical wrecks.  This is a must-see documentary series for history buffs.

What’s your favorite scuba diving documentary? Leave us a comment below.

One thought on “6 Scuba Diving Documentaries You Need to Watch”