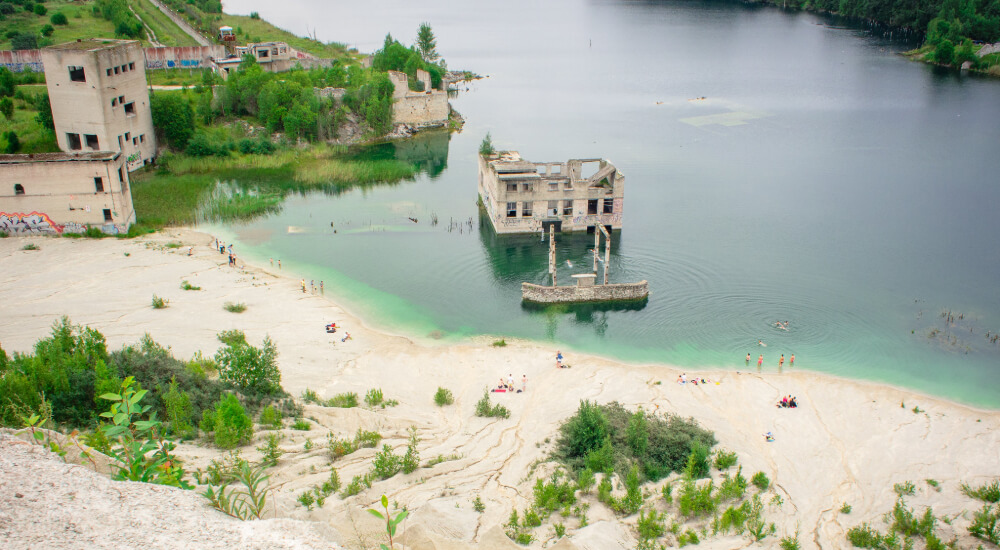 Do you ever get that feeling that you’ve seen it all and want to experience something completely new? If you’re not one to always seek colorful coral reefs and tropical fish, then this article is for you. We found the most unusual dive sites on Earth – from underwater prisons and mysterious ancient cities to otherworldly caves.

Just 40 km from Tallinn, lies a very unusual dive site on the grounds of a now-submerged quarry that used to be mined for limestone. The Rummu quarry dates back to the late 1930s and is close to two former prisons, the nearest being the Rummu prison. During the Soviet era and up until the 1990s, excavation was performed by the prisoners incarcerated nearby. Groundwater was pumped out of the quarry to allow for mining activities., but in 2012, the Rummu prison was closed and the water pumps were shut down.

When the pumping of water ceased, the quarry filled with groundwater, forming a lake that swallowed up several buildings (including an old Soviet bunker), machinery, and the Rummy prison walls. A sunken forest at the bottom of the quarry adds to the surreal scenery. This place is now a popular spot for watersports lovers – including scuba divers, that get to enjoy good visibility and unique underwater attractions.

The Neptune Memorial Reef is an underwater columbarium, or cremation memorial site, located off the coast of Key Biscayne. Covering 65,000 square meters, or 14 acres, of ocean floor, it is also the largest artificial reef in the world, with plans to expand the reef underway. The artificial reef was based on the concept of a lost sunken city, and the site was originally named the Atlantis Memorial Reef. Carved lions mark the entryway into this “lost city”, complete with stone roads, gates, and ruins.

Cremated remains are mixed with cement and cast into memorials that are added to the sunken necropolis. Besides being the eternal resting place for ocean lovers, the Neptune Memorial Reef is also home for a growing marine habitat that numbers almost 200 coral colonies and 56 different species of fish, the most abundant being the bluehead wrasse. The Neptune Memorial Reef is open to all divers, whether you are visiting a deceased loved one or simply curious to see the sculptures and marine life.

Banua Wuhu is an exciting spot that offers you the opportunity to experience diving in one of the only active underwater volcanoes in the world without the threat of lava flows and toxic fumes. The volcano rises more than 400 meters/1300 feet from the sea floor and almost reaches the surface, forming a shoal at a depth of about 5 meters/16 feet. Marine life thrives here, with dense colonies of hard and soft coral, barrel sponges, and sea creatures of all kinds – reef sharks, humpback parrotfish, barracudas, clownfish, and more.

The sulfur that is released as a gas from between the rocks in a string of silvery bubbles makes you feel like you’re swimming in a huge glass of warm champagne. Due to the average temperature of about 38 degrees Celsius/100 degrees Fahrenheit and the high content of sulfur, divers are required to wear a protective suit to avoid skin irritations and burns. Nonetheless, if you can get past that, you are guaranteed an unforgettable experience!

Sitting on the bottom of Qiandao Lake, Shi Cheng is China’s Atlantis – once thriving with life, now a sunken city visited only by divers. It is believed the city of Shi Cheng, also known as Lion City, was built during the Eastern Han Dynasty (AD 25–200) with five city gates and towers and was once the center of politics and economics in the province of Zhejiang. In 1959, however, Shi Cheng was flooded on purpose to make way for a man-made lake that would support a new hydroelectric power station.

Lion City lay forgotten for dozens of years until divers rediscovered the once-opulent city. To this day, the ruins are in pristine conditions, with many of its temples, homes, archways, and paved roads left intact. Even its wooden structures are well-preserved. A tremendous amount of history lies hidden underwater, and many refer to the city as a “time capsule.” Today, only experienced divers can explore this unusual dive site that lies in murky water in almost complete darkness.

It’s not every day that you get to dive inside a former nuclear missile silo, so if you’re ever in Texas and want to experience something completely different from what you’ve tried before, this is the place to be. Valhalla is a decommissioned Atlas-F hardened nuclear missile silo divided into two parts: the main silo and the command room with the crew quarters. The silo is filled with groundwater that seeps through the concrete walls. The water is clear and at a constant 16 degrees Celsius/60 degrees Fahrenheit year-round.

So, what is there to see inside Valhalla? Although the construction once housed lots of equipment, most of it was lifted when the silo got decommissioned. Near the surface of the main silo, there’s a metal shack attached to the wall and the bottom is littered with metal debris. Some control panels for the machinery can also be seen. Although it is tight space, void of any life, the cool thing about Valhalla is not what you can see, but where you’re at. After all, not that many divers can brag about diving a nuclear missile silo.

The Yonaguni Monument is a submerged rock formation resembling a man-made stepped pyramid. What makes it one of the most unusual dive sites in the world is that its origins remain shrouded in mystery. Marine geologist Masaaki Kimura is convinced that Yonugini is a Japanese Atlantis – an ancient city that became submerged following a devastating earthquake some 5,000 years ago. If this is true, the structures may belong to a lost civilization – possibly the mythical Mu or Lemuria civilizations. Other researchers, however, claim that the formations are nothing but natural.

The rocky structures were discovered by a local diver in 1986 and are now a popular attraction among tourists and researchers curious to see the bizarre formations. Divers can observe a variety of details that point to human influence, including a stone column, what looks like a road, and a star-shaped platform. Although to this day, no one can explain what the Yonaguni Monument is or where it came from, this simply adds to the excitement of diving in such an impressive environment.

We know – everybody’s heard of Silfra. This popular diving and snorkeling spot welcomes dozens of thousands of tourists each year, but this doesn’t make it any less special. Silfra is one of the most unusual dive sites because it’s the only place in the world where you can swim between two tectonic plates – the North American and Eurasian plates. The rift was formed in 1789 by a number of earthquakes that opened up several fissures in Thingvellir. The Silfra fissure was the only one that got filled with glacial meltwater from the nearby Langjokull glacier, hence the name “Silfra”, which means “silvery.”

Silfra has three different sections: Silfra hall, Silfra cathedral, and Silfra lagoon. The topography is defined by huge boulders and rocks, tunnels, and caverns. This is a “living” dive site that is constantly undergoing changes; the fissure is slowly widening by about two centimeters per year. Silfra is also renowned for its incredible water clarity. On its journey from the glacier, the water is constantly filtered by porous lava rock, until it becomes so pure that you can even drink it.

Millions of years ago, Australia was the floor of a shallow sea. When the sea drained away, rain-filled the limestone sheets and formed networks of water-logged tunnels. This is how the southern part of the land down under came to have caves full of water in the middle of the desert. The caves are filled with surprises such as weird “curtains” of dense biological material known as Nullarbor cave slimes. These organisms make their living in an unusual way – by oxidizing ammonia, and are independent of sunlight and surface ecosystems.

Divers describe the landscape below the Nullarbor Plain as the closest thing to being an astronaut on Earth. The water inside these giant caves is incredibly clear, which makes one feel like their floating through space. Weebubbie, the main entrance, feels more like a quarry than a cave, and Cocklebiddy – one of the largest tunnels in the world, leads to extensive subterranean lakes. Unfortunately, diving here is very dangerous and only a select number of experienced technical divers are permitted to visit the wondrous world beneath the plains.

What are the most unusual dive sites you’ve ever dived?