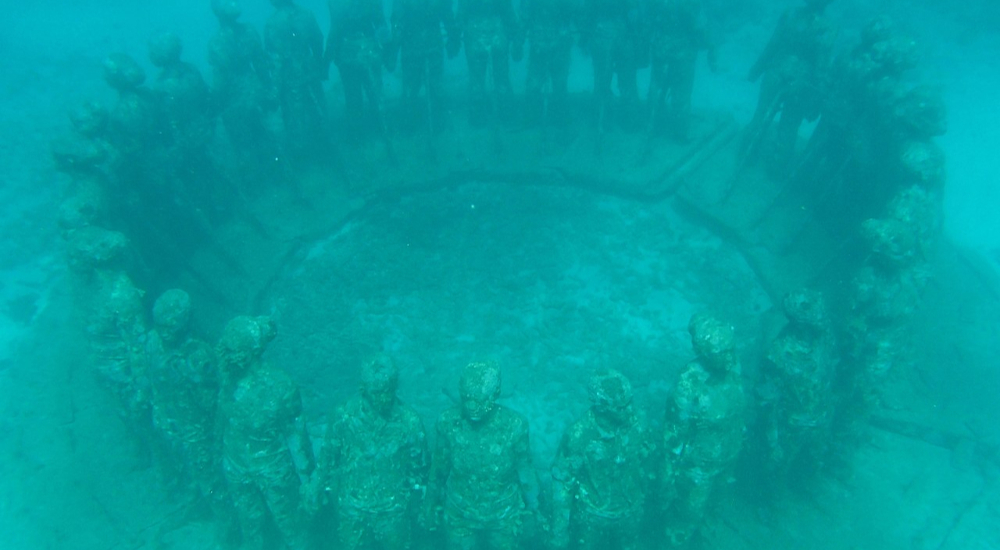 Museums play a crucial role in the success of a nation’s tourism, attracting a significant number of both domestic and international visitors each year. Although exploring the underwater world already feels like visiting a huge natural museum, over the years, humans worldwide managed to set up actual museums underwater. These unique environments incorporate some of the features that make up a great museum and, at the same time, help with the increase of marine biomass in the area. Here are some of the most amazing underwater museums you can visit with your fins on:

This one-of-a-kind museum is located inside the Cancún National Marine Park, between the islands of Cancún and Isla Mujeres. Currently the largest underwater museum in the world, Museo Subacuático de Arte (MUSA) contains over 500 sculptures made by six different artists. Most of the sculptures were created by British sculptor Jason deCaires Taylor, who is also known for creating the world’s first underwater sculpture park – the Molinere Underwater Sculpture Park.

MUSA was set up to divert scuba divers from disrupting the balance of underwater sea life by providing an alternative to natural coral reefs. This innovative ecotourism strategy proves to be a success, the museum attracting hundreds of thousands of visitors each year. The sculptures are made with marine-friendly, pH neutral concrete and are now encrusted with algae and coral growth. The deep area of the museum can be explored by scuba divers, while non-divers can enjoy the shallow gallery through snorkeling or glass-bottom boat tour.

The Museo Atlántico Lanzarote was inspired by the Cancun Underwater Museum of Art and is currently the only underwater contemporary art museum in Europe. The museum contains nearly 300 sculptures, creations of the same talented sculptor that created MUSA – Jason deCaires Taylor. Divers can admire ten different groups of sculptures that were designed to provoke environmental awareness and social change as well as to create new marine habitats.

The installations are have been placed in shallow water just off the coast of Playa Blanca and can be enjoyed by divers, freedivers, and snorkelers. The permanent works include a 100-tonne wall created entirely with pH neutral materials and designed to foster the reproduction of local fish species in Lanzarote, a UNESCO-designated World Biosphere Reserve. Other notable works include The Vortex, The Rubicon, and The Raft of Lampedusa, a sculpted boat that references the influx of refugees on the Spanish island.

Italy, home of the ancient Roman Empire, is blessed with a unique underwater museum that holds the ruins of an ancient Roman town, on the northwest shore of the Gulf of Naples. The town was famous for its healing medicinal hot springs, but it was the same volcanic vents that were once a draw to the area that caused the water levels to slowly rise and eventually drown the ancient town. Today, Baia can be visited by scuba divers in one of the few underwater archeological parks in the world.

There are five underwater sites inside the Baia Underwater Park: Emperor Claudio’s Nymphaeum, Portus Julius, Villa a Protiro, Pisoni’s Villa, and Smoky Reef. Due to the shallow depth of these sites, they are suitable for both scuba divers and snorkelers. Dives are performed with a local instructor, and visitors can swim between these incredible ancient marble sculptures and admire the geometrical mosaic floor of Villa a Protiro.

The Molinere Underwater Sculpture Park, opened in 2006, is presumably the first underwater sculpture park in the world. The sculpture park is the brainchild of – you guessed it – British sculptor Jason deCaires Taylor, who sunk over 70 sculptures on the Grenadian seabed. The pH-neutral cement used for the figures provided a stable platform for marine life to grow, and its texture allowed coral polyps to attach to it.

Some of the more notable sculptures at the Molinere Underwater Sculpture Park include Vicissitudes – a circle of life-sized figures of children of diverse ethnic background holding hands, The Lost Correspondent – a man sitting at his desk and working at his typewriter, TAMCC Faces – a series of life-sized faces seemingly molded into the crevice of a boulder, and Sienna – the figure of a skin diver from a popular local story.

The Underwater Archeological Park of Caesarea is the first of its kind in Israel. The city and harbor of Caesarea were built under Herod the Great during c. 22–10 or 9 BCE to honor his Roman patron, Caesar Augustus. The site is considered one of Israel’s great archaeological treasures and history buffs can now explore the ancient sunken harbor with waterproof maps.

There are about 36 signposted sites along four marked trails, one of which is also accessible to snorkelers. Divers of all levels can observe the sophisticated construction methods Herod used to build the ancient ports. The area contains ruins of breakwaters, loading and unloading docks, warehouses, boardwalks, pools, and marble columns. There are also remains of sunken ships and giant ancient anchors.

The Florida Panhandle Shipwreck Trail links together over a dozen shipwrecks off the coasts of Pensacola, Destin, Panama City, and Port St. Joe. The ships, chosen by local dive operators for their history and ecological diversity, were placed in this area to create artificial reefs. Divers can explore tugboats, oilfield supply vessels, WWII minesweepers, coal barges, a freighter, a historical steamer, and the USS Oriskany – an aircraft carrier that creates the world’s largest artificial reef.

Participating dive shops and charter boats provide divers with a passport containing details about each shipwreck and a dive log to fill in each stop and validate the visit with an official sticker. Diving conditions at this underwater museum of shipwrecks vary from easy dives in shallow water of only 25 or 50 feet to deeper dives of 100 feet or more where currents may be present.

One of the most unusual underwater museums you can find, this must-see attraction in Crimea will take you through the history of the USSR. The museum was created in 1992 by Ukrainian scuba diver Vladimir Broumenskyy. By that time, the Soviet Union had already collapsed, and the statues and busts of communist leaders had been taken down from their pedestals. Broumenskyy decided to start his recycling project by gathering the sculptures from all over Ukraine and placing them underwater for divers.

The Alley of Leaders, as it is known, has around 50 algae-covered sculptures and busts of former Soviet leaders, including Dzerzhinsky, Lenin, Marx, and Stalin. To top off the weirdness, replicas of some of the most iconic tourist attractions on Earth such as the Eiffel Tower and Tower Bridge have also been placed here. Those in charge of this underwater museum are open to adding new sculptures to the site, so the collection is expected to grow.

Have you ever visited an underwater museum or does any of the above attractions pique your interest? Leave us a comment below!