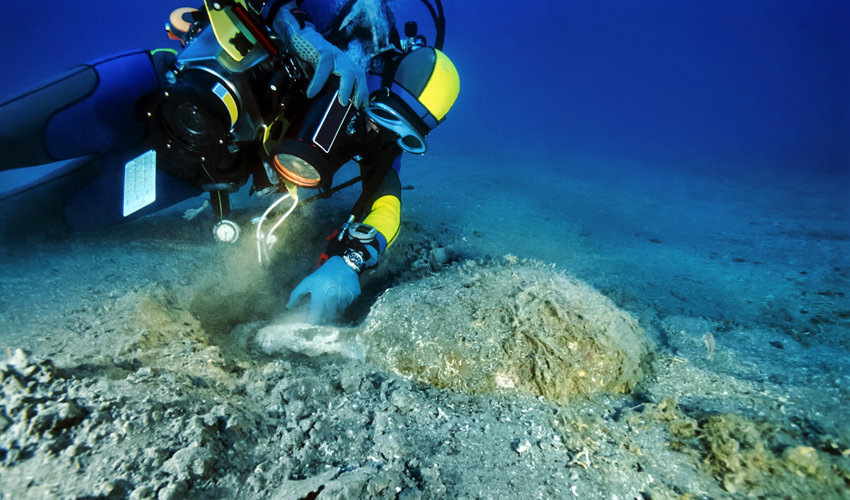 The seafloor is a treasure trove of cultural heritage. From pirate towns to ancient villages that go back to the Neolithic period, we are taking a journey through the most fascinating underwater archaeological sites on Earth. A few of them you can even dive!

Port Royal, Jamaica, was funded in 1494 by the Spanish and was once the largest city in all the Caribbean. The bustling port functioned as a center of shipping and commerce. Pirates from all over the world congregated at Port Royal and by the 1660s, much of the city was overrun with pirates, cutthroats, and prostitutes. Port Royal became known as “the wickedest city on earth,” a place where pirates and traders came to seek pleasure and rum.

Its glory days, however, came to an end in 1692 when a devastating earthquake hit the city, destroying many of the city’s houses and forts. Attempts were made to rebuilt Port Royal, but fires, hurricanes, floods, and another devastating earthquake in 1907 destroyed nearly all of the rebuilt city. Some believe the destruction of this den of iniquity was a punishment from the Gods for the behavior and sins of the pirates and prostitutes that once filled its streets.

Jamaica has recently submitted the “Sunken City” of Port Royal to be designated as a cultural site on the World Heritage List. UNESCO calls this site a “catastrophic site,” meaning a place devastated by a natural disaster and in the act of destruction, preserved in situ. Today, most of Port Royal lies underwater with its elements more or less undisturbed, preserved by the oxygen-depleted underwater environment.

To dive at Port Royal, you need special permission from the local authorities. This can be easily organized through any licensed and reputable dive operator. The sunken city is located at the end of the Palisadoes at the mouth of the Kingston Harbour. It is possible to dive in the area year-round, but water visibility is best during the summer months.

Antirhodos was an island in the eastern harbor of Alexandria, Egypt, a center of culture, opulence, and royalty. About 1,400 years ago, a huge tsunami hit the coast of the great city of Alexandria and sank the nearby Antirhodos, taking down Cleopatra’s renowned Ptolemaic palace and the island’s lighthouse.  The palace was destroyed and remained undiscovered until the 1990s when a French archaeologist named Franck Gaddio came across the writings of the Greek historian and geographer Strabo.

Gaddio spent ten years preparing for the expedition that would lead him to the ancient palace of the last active ruler of the Ptolemaic Kingdom of Egypt, Cleopatra. Strabo described the island of Antirhodos and the palace and pointed that they were situated not far from the shore of Alexandria. Guided by the historian’s writings, Goddio and his team discovered a 1st century BC or 1st century AD Roman ship filled with jewelry and glass cups and the wooden foundation of the palace, which was dated back to approximately 200 years before Cleopatra was born.

Two well-preserved sphinxes, statues of lions, a statue of the goddess Isis, giant columns of red granite, and an array of pottery were also found here. The statues of the sphinxes and lions have unfortunately been removed from the water, but several other ancient relics remain underwater for divers to admire. Despite this, Cleopatra’s Palace offers the unique experience of diving in one of the oldest underwater archaeological sites in the world. The site is very shallow, but the poor visibility and choppy waters can pose issues for inexperienced divers.

Reportedly the oldest submerged city in Europe, Pavlopetri lies off the coast of Laconia in the Peloponnese peninsula and boasts much archaeological significance. The town is about 5,000 years old and was named after St. Paul, the Christian apostle that traveled the world to teach the gospel of Christ. Roughly 3,000 years ago, as a result of three earthquakes that affected the area, Pavlopetri slipped beneath the sea and remained undiscovered for thousands of more years.

In 1967, oceanographer Dr. Nicholas Flemming from the Institute of Oceanography at the University of Southampton discovered the existence of Pavlopetri at a depth of only three to four meters. A year later, Flemming and his team of archaeologists from the University of Cambridge returned to the site to map and date the sunken city. What they discovered was a remarkable prehistoric settlement with buildings, streets, and squares. The ruins were dated to the Mycenaean period (1680-1180 BC) and it was established that the port was an important trade center in the Aegean Sea.

Today, the sunken city of Pavlopetri is an underwater cultural heritage site protected by the UNESCO Convention on the Protection of the Underwater Cultural Heritage. The site has been the subject of a BBC documentary called City Beneath the Waves: Pavlopetri, which follows a team of international experts on their quest to investigate the ruins and graphically recreate how the town once have looked. Although recreational divers are not permitted to dive at Pavlopetri, archaeological divers are granted permission to study and explore the spectacular ancient city.

Located off the coast of Atlit, the ancient submerged Neolithic village of Atlit Yam is said to be the oldest discovered submerged city to date. The village has been carbon-dated to 8,900-8,300 years ago and belongs to the final Pre-Pottery Neolithic B period. It was discovered in 1984 by marine archaeologist Ehud Galili from Zinman Institute of Archaeology, University of Haifa, a few hundred meters off the north bay of Atlit, at a depth of eight to eleven meters.

Archaeologists discovered here what they believe to be the earliest-known constructed freshwater wells. Among the most interesting features of the lost village are the seven megaliths arranged in a semicircle around a freshwater spring, which may have been used for rituals. Several burials have also been discovered at Atlit. The skeletons of men have been found with ear damage, which experts believe may have been caused by diving for seafood in cold water.

The biggest mystery is how the village ended underwater. The piles of fish ready for trade or storage found here have led some researchers to assume that the settlement was abandoned suddenly. They believe Atlit Yam may have been engulfed by a huge tsunami caused by an eruption of Mount Etna about 8,500 years ago. Other researchers have hypothesized that the village was a victim of rising sea levels.

Regardless of how it ended up underwater, Atlit Yam remains a fascinating place to explore. But one that very few get to see with their own eyes, despite its shallow depth. Unfortunately, this underwater archaeological site is not yet open to recreational divers, as archaeological work and excavations are still taking place here. The local dive operators are nonetheless hopeful it will eventually be open to all scuba divers.

Named after the Greek hero Heracles (Hercules), Heracleion was an ancient city located near the Canopic Mouth of the Nile, not far from Alexandria. It was built on adjoining islands in the Nile Delta and its houses, temples, and wharves were linked by bridges, pontoons, and ships. Some of Heracleion’s distinctive features were the temple dedicated to Khonsou, god of the Moon, and the large temple of Amun-Gereb, the supreme Egyptian god at the time.

The ruins of Heracleion were discovered by Franck Goddio – the same archaeologist that located Cleopatra’s Palace – in 1999, after a five-year search. The remains lie in Abu Qir Bay in under ten meters of water. Goddio and his team established that the city was probably built around the 8th century B.C. and fell victim to a number of natural disasters until being swallowed up by the sea in its entirety sometime around A.D. 700.

An array of artifacts, including gold jewelry, bronze coins, treasure-carrying ships, granite columns, and the remains of a temple, were discovered by the archaeological divers exploring the submerged city. Through their discoveries, researchers began to understand what life was like inside Heracleion; the city was presumably a bustling metropolis with a rich cultural history. Cleopatra herself is said to have been crowned in one of its temples.

To this day, archaeologists have managed to explore very little of the city’s area. According to Goddio, it could take up to 200 years for experts to discover all of Heracleion’s secrets. Scuba divers who wish to dive at Heracleion should contact the local dive operators, as recreational diving is not typically possible.

What’s the most history-filled dive site you’ve ever explored?