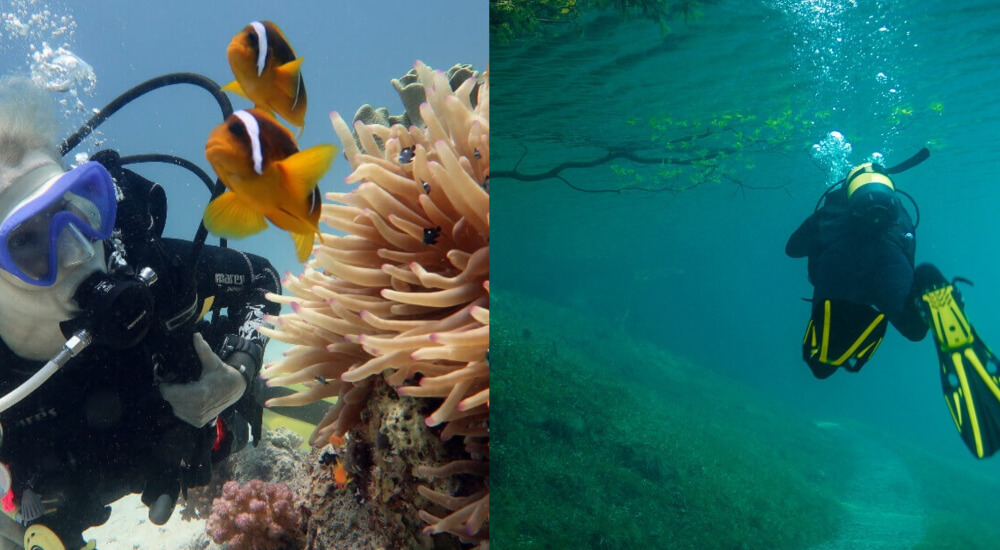 Most of us dive almost exclusively in marine environments, but there are plenty of divers living in landlocked countries where freshwater diving is the only option. Some may even prefer diving in freshwater. We thought we’d look into the differences between saltwater and freshwater diving to see just how much each factor impacts our dives.

Most freshwater dives are shore dives, so you can go into the water straight from the shore. This also means that due to the stony bottom, booties are often required. Saltwater dives, however, are most often boat dives and it may take up to a few hours (or days, if we think of liveaboards) of traveling on the water to reach your diving spot.

Sea level is the reference standard for elevation, so the seas and oceans are at 0 altitude. Freshwater divers, however, may dive at different altitudes, as lakes can be found at very high altitudes. At altitude, the atmospheric pressure is lower than at sea level. This means that surfacing after an altitude dive leads to a greater relative reduction in pressure and increases the risk of decompression sickness. For this reason, altitude dives have shorter no-decompression times.

The salinity of water varies around the world; some bodies of water may be saltier than others. The Dead Sea, for example, has a salinity of 33.7 percent and is almost ten times saltier than ordinary seawater. Temperature is another natural factor that affects the density of the water. A diver may notice that diving in very cold water makes them more negatively buoyant.

Consequently, there are several factors to be taken into account when it comes to buoyancy, but water salinity is an important aspect. For a diver to determine proper weighting, they should perform a buoyancy test whenever they switch between freshwater and saltwater and whenever they make changes to their gear. Generally speaking, a diver may have to as much as double their weight when moving from freshwater to saltwater or lose half of it when moving from saltwater to freshwater.

Freshwater usually has worse visibility than saltwater. Many saltwater dives feature a sandy bottom that even when disturbed, it still does not negatively impact visibility all that much. When diving in lakes, for example, the bottom is typically covered in mud, which can greatly affect visibility when disturbed. And due to the reduced current, there are also more static particles in freshwater. As such, divers swimming in freshwater need to be more careful when it comes to kicking their fins.

Saltwater dive sites can have unpredictable current, making the dive more challenging, while rivers typically have a predictable current based on their flow. Freshwater currents may also be caused by wind or bottom formations. Inland freshwater dive sites such as lakes are unexposed to tides (except for very large lakes) and major water movements so there’s no current at all.

One of the main things that sets apart saltwater from freshwater is aquatic life. Generally, saltwater has a lot more to offer in terms of animal diversity than freshwater. There is not only less variety of fish or other creatures in rivers, lakes, and ponds but freshwater species are also less colorful and, most of the time, smaller than many of their saltwater relatives. On the other hand, there are way fewer venomous animals in freshwater environments. However, most marine creatures are reportedly friendlier and less afraid of divers than freshwater animals.

Proper cleaning and storing of any dive gear should be a priority for every diver, but the dive gear you use for your saltwater dives does require a bit more care. Saltwater is one of the biggest enemies of scuba gear. From the moment water starts to evaporate, salt crystals form and could jam your zippers, valves, or the free-flowing regulator.

Now you may think that freshwater diving does not require much cleaning, but you’d be wrong. Even if you dive in freshwater, you still need to clean your gear with clean water and mild soap, as invasive micro species can attach to a wet gear that has not been cleaned properly.

Are you a freshwater diver or a saltwater diver? Leave us a comment below and tell us what type of aquatic environment you prefer and why.