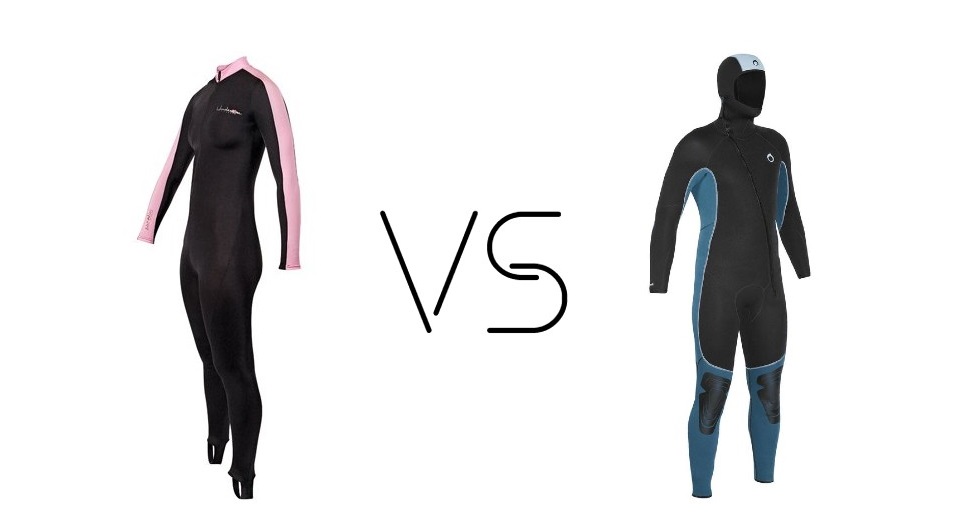 When diving in very warm water, two of the most popular types of diving suit you can choose from are dive skins and wetsuits. To pick the most effective and suitable gear for your dive, you must take into account several factors such as water temperature, the depth of the water, your proneness to cold, and more. Let’s look at the differences between a dive skin and a wetsuit so you can make the right decision.

Wetsuits have quite a long history. The neoprene wetsuit was invented in 1952 by physicist Hugh Bradner, who was investigating the problems encountered by frogmen in cold water. Bradner, a diver himself, developed a suit that could trap water between the body and the neoprene, but his invention failed to gain commercial success. His work, however, inspired other watersports gear manufacturers who have popularized the wetsuit among surfers and scuba divers.

The dive skin was invented in 1981 by Tony Farmer of Sports Suits of Australia. Farmer wanted to provide divers exploring very warm waters with an inexpensive suit that could protect them against animal stings and sunburn. The idea came after he observed some swimmers and surfers using pantyhose as swimsuits. He tested his first dive skin model in 1982 and released the production models in 1983. Dive skins soon became very popular among swimmers, surfers, and shallow water divers.

Both dive skins and wetsuits work by trapping a thin layer of water between the diver’s body and the garment. In the case of wetsuits, this layer of water is warmed by the body and the material of the suit is what actually helps prevent heat loss. Dive skins, on the other hand, are made of materials that provide very little thermal insulation.

Dive skins, also known as stinger suits, sunsuits, or UV suits, are useful in two ways. Firstly, they are used on their own for protection against jellyfish stings, stinging critters, coral abrasion, and sunburn. When worn alone, however, they provide negligible thermal protection. Secondly, they are worn as a first layer under a wetsuit to get in and out of the wetsuit faster and without any struggle.

The main use of a wetsuit, on the other hand, is temperature control. The wetsuit helps divers retain body heat and keep warm. The thickest of wetsuits can withstand temperatures as low as 3° C/38° F. And just as dive skins, wetsuits help protect your skin against animal stings, abrasion, and UV rays.

Wetsuits are most often made of closed-cell foam neoprene, but it is also possible to find wetsuits made of open-cell neoprene coated with Titanium. Others are made from a blend of neoprene and butyl rubber. Spandex and nylon are commonly used for the lining of the wetsuits, but actual wetsuits made entirely of these materials do not exist.

*Use this table for reference only. The dive skin or wetsuit required for a dive depends on many other factors, not just water temperature.

The material and thickness of a dive skin make it suitable for very warm climates where the water temperature reaches up to 29° C/85° F or more. Dive skins offer little thermal protection on their own but may be worn beneath a wetsuit to increase its thermal insulation properties.

A wetsuit’s main job is to keep divers warm when immersed in water. The closed-cell foam neoprene that is used for most wetsuits contains small bubbles of nitrogen gas. Nitrogen has very low thermal conductivity and the gas bubbles in the suit minimize heat transport, thereby greatly reducing heat transfer from the body to the water outside the suit. The wetsuit must have a snug fit to work efficiently.

Dive skins are neutrally buoyant and do not require any additional weight.

The neoprene material used for the manufacturing of wetsuits weighs significantly less than an equal volume of water and, therefore, will always float. A wetsuit will always provide the wearer with additional buoyancy and the thicker the wetsuit, the more buoyant you will be. Age can also affect suit buoyancy, as the neoprene foam tends to compress with time. There can also be significant differences in buoyancy between suits made by different manufacturers, despite having the same thickness.
As such, choosing the right diving garment for you and proper weighting are key in achieving good buoyancy when wearing a wetsuit.

Remember, wearing an exposure suit is beneficial not only to help you keep warm but also to protect your skin from stings, scrapes, and sunburn. Nonetheless, heat loss is a real threat even in tropical climates. Fortunately, there are many types of dive skins and wetsuits available to keep your skin safe and your body warm at different water temperatures.