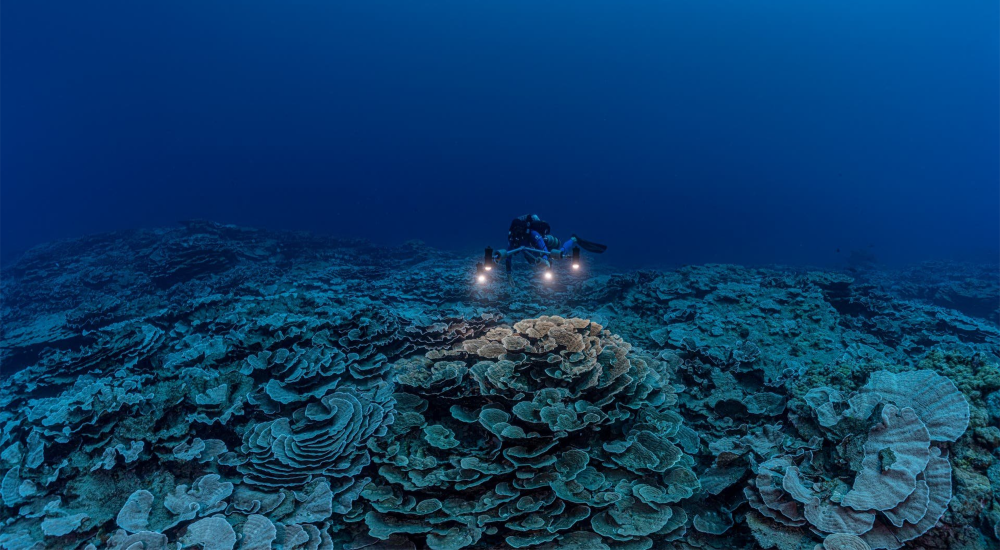 One of the largest coral reefs growing in the mesophotic zone has recently been discovered off the coast of Tahiti. The reef, which lies at depths of between 30 meters and 65 meters, seems to be untouched by climate change. Its depth could explain why it has remained protected from the effects of the warming ocean.

Most of the world’s coral reefs are located in shallower waters at depths of about 25 meters. While mesophotic reefs face the same threats as shallow reefs, it is believed that shallow coral reefs may nevertheless be even more susceptible to increasing acidity caused by heightened levels of carbon dioxide in the atmosphere and oceans.

Today, there are very few pristine reefs remaining. Over 50 percent of the world’s coral reefs have died in the last 30 years. In a grim estimate, scientists say that up to 90% of all coral reefs worldwide may disappear over the next 20 years.

“As shallow waters warm faster than the deeper waters, we may find these deeper reef systems are refuges for corals in the future. We need to get out there to map these special places,” said Professor Murray Roberts, a marine scientist at the University of Edinburgh, in an interview for the BBC.

The reef off Tahiti was found during a diving expedition that’s part of the Seabed2030 Project, a collaborative project between the Nippon Foundation of Japan and the General Bathymetric Chart of the Oceans. The project aims to gather all available bathymetric data to produce the definitive map of the world ocean floor by 2030.

Described by Alexis Rosenfeld, underwater photographer and founder of the Ocean project, as “a work of art,” the rose-shaped reef is around 3 kilometers long and 60 meters wide. It probably took around 25 years to grow and is made up predominantly of Pachyseris speciosa, a plate-like hard coral with rings of concentric ridges. During the dives, which totaled about 200 hours, the team got to witness the coral spawning.

Discoveries such as this one may help marine scientists develop insights that could help in coral reef preservation. The newly found coral reef off Tahiti could suggest there may be many more mesophotic reefs in the ocean. As of now, only 20% of the entire seabed is mapped. We still have so much to learn about this vast body of water that covers more than 70% of the Earth’s surface.

The team will conduct further dives in the coming months to continue their investigations on the unusual coral reef in French Polynesia.