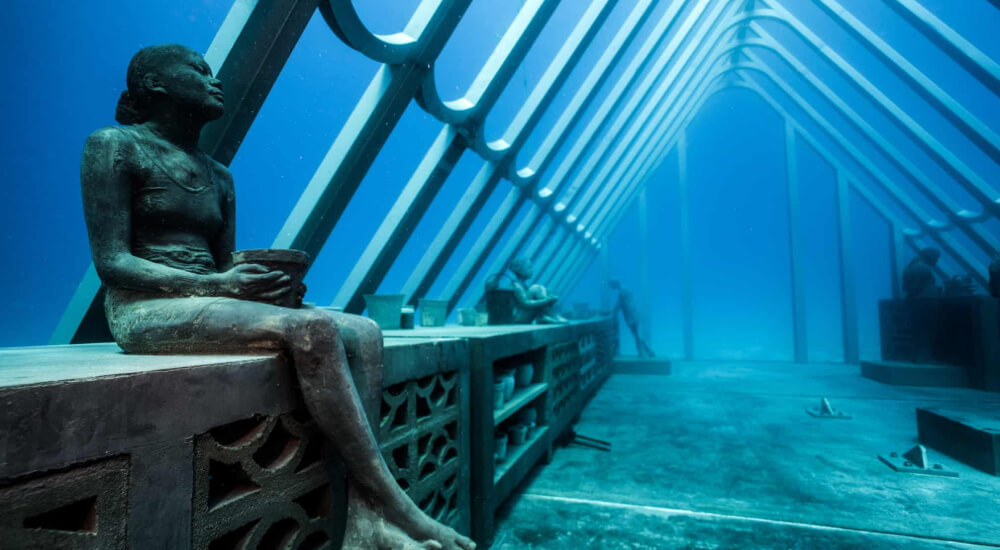 The Museum of Underwater Art (MOUA) finally opened on August 2 after months of delay caused by the COVID-19 pandemic. Australia’s first underwater museum is located on the ocean floor of the Great Barrier Reef Marine Park’s John Brewer Reef, about two hours off the coast of Townsville. Two installations are currently open to visitors: Coral Greenhouse and Ocean Siren.

Looking towards the Future

The Coral Greenhouse was created by British artist Jason deCaires Taylor, who has worked for underwater sculpture parks throughout the world. The installation consists of a 64-ton art piece with a 40-foot skeletal structure that houses 20 sculptures cast from school children that study and tend to coral, or “tend to their future”, as the artist says.
Divers can also observe three sculptures based on local terrestrial flora, like eucalyptus and umbrella palm, which are supported by buoyancy devices.

The structures have a biomorphic design, which means their form will be determined by nature. The Coral Greenhouse is currently in almost pristine condition, with just some small algae and organisms sticking to its structures. Over time, the sculptures will be absorbed by the surroundings, offering a refuge for marine life. “The beam sections provide minimal resistance to wave energy while providing an ideal surface for filter-feeding organisms and schooling fish to congregate,” says deCaires Taylor.

The Ocean Siren, the work of the same talented sculptor, is the only sculpture visible from the surface of the water. The 4.8-meter-tall “siren” was modeled on Takoda Johnson, a 12-year-old member of the local Wulgurukaba people, which were among the first people to have lived in the Townsville region. The Ocean Siren is seen looking over the land of her forefathers and reacts to live water temperature data from the nearby weather station, changing color in response to the variations in temperature.

Two more exhibits are scheduled for completion in 2021 as part of the Museum of Underwater Art – one at Palm Island, that should be completed in June, and the other at Magnetic Island, to be open for the public by December.