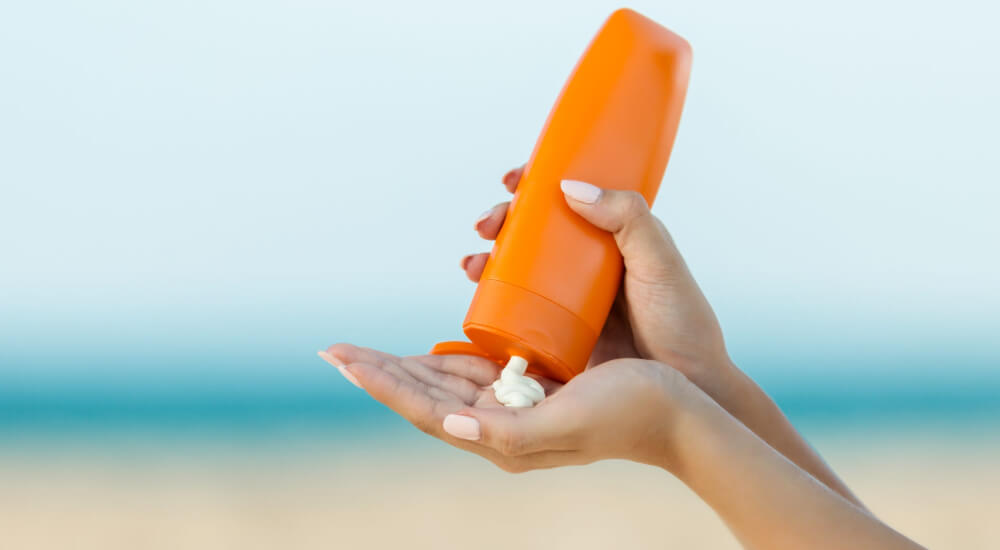 Have you ever considered that the sunscreen you wear may negatively impact coral reefs and wildlife? Not all sunscreens are made the same, but the vast majority do contain harmful UV-blocking chemicals that researchers have deemed harmful to aquatic life. Let’s dive into what reef-safe sunscreen means and what ingredients you should steer clear of to protect the environment.

The Environmental Toll of Sunscreen

It is estimated that 4,000 to 6,000 tons of sunscreen wash into coral reef worldwide each year. This does not spread out evenly over the entire masses of water but concentrates on popular tourist sites. This means that some of the most popular reefs, including those in national parks or protected areas, are exposed to a great amount of sunscreen. The main chemical culprits, oxybenzone and octinoxate, have been found to be highly toxic to developing corals and marine life.

Sunscreen chemicals affect marine life in different ways. In corals, the chemicals accumulate in the tissues and can induce bleaching, deform the young corals, and even kill them. Green algae are also affected by having their growth impaired and the photosynthetic process disrupted. In fish and sea urchins, some sunscreen chemicals lead to a decrease in fertility and reproduction, while in mussels, they can induce defects in the young.

A 2015 study published in the journal Archives of Environmental Contamination and Toxicology found that oxybenzone (Benzophenone-3) is an emerging contaminant of concern in marine environments. Researchers examined the effects of the chemical on the larval form of a species of coral and its toxicity in vitro to coral cells from a total of seven species of coral. The study found that oxybenzone has toxic effects on young coral, leading to DNA damage and exacerbating coral bleaching, among other problems.

Octinoxate is another endocrine disruptor to coral and although it is typically used in smaller amounts than other chemical sunscreen ingredients, it takes longer to biodegrade, which makes it equally hazardous. Some reports say that it is even more toxic than oxybenzone.

What Does Reef-safe Sunscreen Mean?

You may have noticed that some sunscreens are marked as “reef-safe” or “reef-friendly.” Unfortunately, these terms are not regulated so you can’t always trust the product label. Sunscreen manufacturers are not required to test and demonstrate that their products are harmless to aquatic life. Nonetheless, products marked reef-safe do not contain harmful ingredients such as oxybenzone and octinoxate. Despite this, it is also important to check the active ingredients to ensure that no other reef-harming chemicals or minerals are included in that sunscreen product.

The active ingredients in chemical sunscreen products are typically the most problematic, but preservatives such as parabens can also cause environmental issues. Do your research on each ingredient listed on the label. Mineral sunscreens are also not entirely worry-free options. These products contain safer ingredients, but when these ingredients are uncoated and nano-sized, they can enter the cells of invertebrates and kill the cells. Look for coated, non-nano mineral ingredients larger than 150 nanometers, which are less toxic and pose very little threat.

What about Human Safety?

In 2019, the Food and Drug Administration (FDA) announced a sunscreen safety proposal in which it concluded that of the 16 active ingredients currently used in sunscreen products, two of them – zinc oxide and titanium dioxide – are generally regarded as safe and effective (GRASE) for humans. Two ingredients – PABA and trolamine salicylate – are not GRASE, while the remaining 12 ingredients (including oxybenzone and octinoxate) do not have enough data to support a safety rating.

Before purchasing a sunscreen product, make sure that it does not contain the following substances on the Haereticus Environmental List (HEL) list. The Hel list contains the chemicals that are known pollutants in many different environments, such as ocean systems, and can harm wildlife.

Destinations that Have Sunscreen Bans

The archipelago nation of Palau is the first country to ban toxic sunscreen. Stores in Palau are now offering only reef-safe sunscreen and imports of sunscreen containing eleven harmful chemicals are prohibited. This pristine paradise is home to some of the healthiest reefs in the world, and government officials intend to keep it this way.

In a press statement, Palau’s President Tommy Remengesau explained “We have to live and respect the environment because the environment is the nest of life, and without it, nobody in Palau can survive.”

Aruba joined in on the fight against toxic ingredients in skincare by banning octinoxate and oxybenzone. Not only this, but the Parliament has also officially banned single-use plastics such as straws, plastic cups, containers, utensils, stirrers, and other similar products. All import, sale, and production of sunscreen containing the toxic chemicals and single-use plastics will be penalized.

Senator Janelle K. Sarauw, one of the sponsors of the legislation, said: “I am very mindful to include measures that protect the natural playground of both our children and tourists alike – the beaches; as well as one of our economical ways of life – fishing for sale and food.”

Beginning 2021, sunscreen products containing the reef-damaging chemicals oxybenzone and octinoxate will not be sold in the state of Hawaii. Experts believe that most of the products sold in the U.S. are not as good as they should be. The bill will hopefully pressure manufacturers into producing safer and more effective chemical sunscreen filters.

One of the most popular diving destinations in Florida, Key West, has recently joined Hawaii in banning non-biodegradable sunscreen. Starting 2021, no store on the island can carry sunscreens that contain the reef-damaging chemicals oxybenzone and octinoxate. The Great Florida Reef is the largest reef in the continental U.S. and is vital to the nation both environmentally and economically. Banning the harmful chemicals was “the right thing to do,” officials say.

The Caribbean island of Bonaire approved a motion to ban sunscreen products containing oxybenzone and octinoxate. Bonaire is a leader in the protection of coral reefs and scientists from the University of Wageningen in the Netherlands have researched the toxic sunscreen chemicals in the waters around the island. Researchers discovered high concentrations of these chemicals in the most popular tourist areas. As a result, Bonaire will be oxybenzone and octinoxate-free by January 1, 2021.

Although sunscreen products containing toxic ingredients have not technically been banned in Mexico, some parts of the country have taken matters into their own hands and banned harmful sunscreens. In areas such as Cozumel National Park and other major tourist parks such as Chankanaab, Xel Ha, Xcaret, and Garrafon, as well as at Playa del Carmen, tourists are asked to use only biodegradable, reef-safe sunscreen.

What You Can Do to Help Protect Coral Reefs

As a diver, snorkeler, or swimmer, you can reduce the risk of harming coral by switching to reef-safe sunscreen. Fortunately, we are starting to see a trend in sunscreen manufacturing, with more and more brands creating reef-friendlier sunscreen lines. Mineral sunscreen products are a safer option but make sure the sunscreen has been tested biodegradable. Avoid sunscreens containing petrolatum (mineral oil) and titanium dioxide, that do not biodegrade and are known to be harmful or fatal to aquatic life.

Sunscreen products generally come in the form of lotion or spray, which is another factor you need to take into consideration. We already discussed the importance of choosing the right ingredients for your sunscreen, but it’s also worth noting that a spray sunscreen can land on the sand or wash off into the ocean more easily than a lotion one. You may also want to look for a quality water-resistant sunscreen as it’s less likely to wash off.