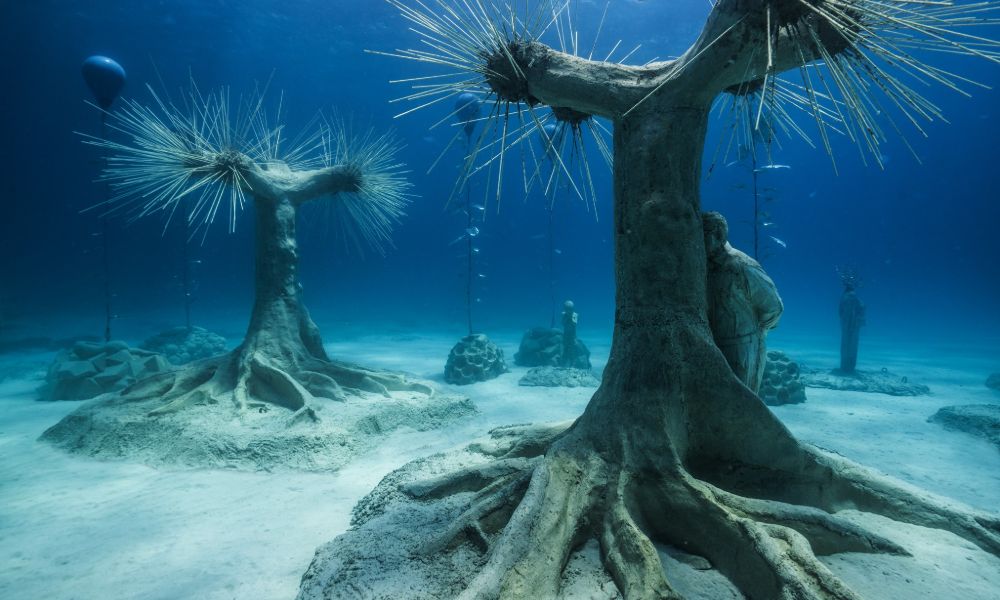 A newly created Marine Protected Area has opened its doors waters to divers, offering a collection of 93 beautifully sculpted artworks representing humans, trees, and other elements of nature. The underwater museum is known as MUSAN (short for the Museum of Underwater Sculpture of Ayia Napa) and is located just off Pernera Beach in Ayia Napa.

The museum was first proposed in 2014 but its implementation began as late as 2019. Now, two years later, the underwater park is a vision come true. The project, estimated at €1 million, is a joint effort between Ayia Napa municipality, the Department of Fisheries & Marine Research, and the Ministry of Tourism.

Dubbed “the world’s first underwater forest,” the art installation aims to replicate a terrestrial forest, resembling a path through a forest. Tree sculptures weighing up to 13 tonnes each and other botanical elements together with human figures spread across a surface of 170 meters (560 feet).

All sculptures were created by world-renowned British artist Jason deCaires Taylor, known for other works in the Mediterranean such as the Molinere Underwater Sculpture Park in Spain and the Underwater Museum of Cannes in France. They are made of pH-neutral materials such as stone, rock, and shells.

The artworks are located 6 to 12 meters (19 – 39 feet) deep and some of the tree branches sit just below the surface. According to museum officials, the sculptures combine traditional sculptural formations with contemporary design. The installation examines the impact of man on the natural world, like climate change and the loss of biodiversity.

“I firmly believe that Jason’s 93 artworks will be a haven for many sea creatures and will contribute to the development of biodiversity in the area. The underwater museum will be a living visual and ecological experience, with works of art interacting with nature and evolving over time and I’m certain it will bring people closer to the marine environment and the conservation and protection of our marine ecosystem,” says Marina Argyrou, director of Cyprus’ Department of Fisheries and Marine Research.

By the local government’s predictions, MUSAN will bring in 50,000 visitors annually. Thanks to the shallow depth of the artworks, both divers and snorkelers can enjoy the mystical forest underwater. Hopefully, the experience will also raise awareness of the need to protect our marine environment.