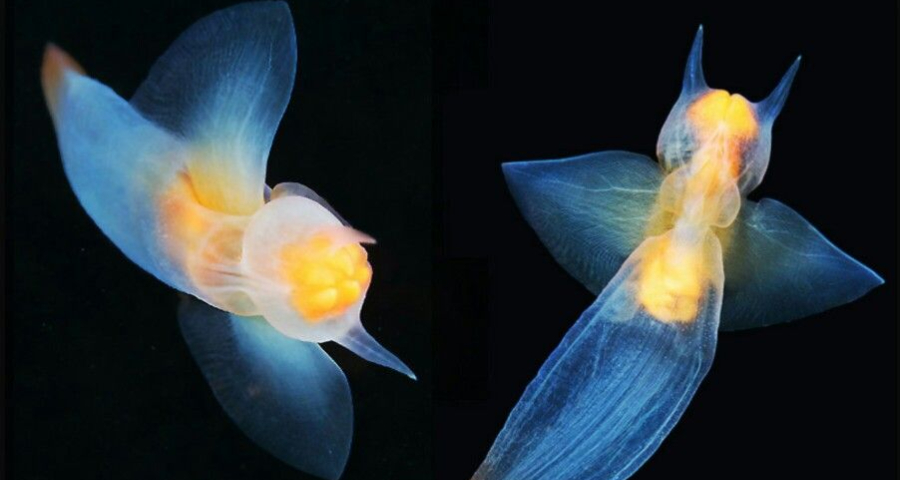 Everybody loves sharks, dolphins, sea turtles, rays and other warm-water animals. But we also know that there are plenty of cold-loving animals that thrive in areas such as the Arctic. Here are some of the unique creatures that live beneath the ice:

Also known as “clione,” the sea angel is a pelagic sea slug found from the surface of the water to a depth greater than 500 meters. But unlike the typical snail, they flap their delicate “wings” to get around in the water at speeds up to 100 mm/s. They are extremely small and can grow to a maximum length of only 5 centimeters.

Adults feed almost exclusively on their relatives, the sea butterflies. The feeding process is quite interesting. Their mouth consists of three pairs of buccal cones, which they use to grab the shell of the sea butterfly. The sea angel then grasps the prey with its chitinous hooks and extracts the body of the sea butterfly out of its shell and swallows it whole.

The Arctic comb jelly is an unusual ctenophore that as opposed to its relatives, prefers the colder waters of the Arctic Ocean and adjacent polar seas. It is found mostly in surface waters down to 50 meters. The translucent creature gleams with all colors of the rainbow. This is caused by the light reflecting off on the eight rows of moving cilia in the comb ridges on its body.

This species of sculpin is found among seaweed or on rocky bottoms of the Northern Atlantic Ocean and adjacent subarctic and Arctic seas at depths of up to 450 meters. It typically grows to 30 centimeters in length but specimens from the Arctic and subarctic areas can reach up to 60 centimeters. As all fish of its kind, the shorthorn sculpin has a squat appearance with a large spiny head.

The kaleidoscope jellyfish is a tiny creature that thrives in cold water grows to about 2 centimeters tall, with the stalk accounting for half of its size. The remainder of its body is shaped like a funnel and its color varies from grey/green to red/brown. It has eight arms that radiate from its central mouth and each arm ends in clusters of up to 100 tentacles.

The jellyfish has an adhesive disk which it uses to attach itself to various species of seaweed. It has almost lost the ability to move and spends most of its life attached to marine flora, but it can move by using its tentacle-covered mouth. They live on brittle stars, snails, and crustaceans, and once these organisms have been consumed, the jellyfish expels the shells from its mouth.

Here’s a shrimp that took the basic characteristics of an amphipod but also added a dash of weirdness. The skeleton shrimp is found not only in the Atlantic Ocean but also in the North Atlantic and North Pacific Oceans. They usually live near the coast and eat whatever they can get. Allegedly, they freeze and wait for prey (worms, crustacean larvae, protists) to come along, which they then ambush.

Brittle stars are seafloor dwelling organisms that look like the slender version of a starfish. They play an important role in the Arctic food web, reshaping the seafloor sediment surface and influencing the distribution of other bottom-dwelling species. More so, they provide nutrition to fish and sea stars.

The Gorgonocephalus arcticus is a suspension feeder, extending its arms into the water column in search of plankton. Its five arms extend from a central disk and each arm branches off into multiple smaller subdivisions. Like all other echinoderms, basket stars have tube feet that are used to move the captured plankton towards the oral surface. This fascinating species is also able to live and grow non-parasitically on the exterior of other sessile animals.

Described by some as the unicorn of the sea, the narwhal is a medium-sized toothed whale that can grow to a length of 5.5 meters (excluding the tusk). They are related to belugas, bottlenose dolphins, harbor porpoises, and orcas, and just like them, they travel in groups and feed on fish, squid, shrimps, and other marine creatures.

The tusk is the animal’s upper left canine tooth and some males have two tusks or none at all. about 15 percent of female narwhals have a tusk. Some medieval Europeans actually believed that the tusks are horns from the legendary unicorn. They were considered to have magic powers and Vikings were able to sell for many times their weight in gold.

Also known as white whales, belugas are born gray or brown and fade to white after they become sexually mature at around five years of age. The animal is adapted to life in the Arctic and its white color is just one of the characteristics that differentiate it from other cetaceans. Belugas also possess a protuberance at the front of their head which houses an organ (called melon) involved in communication and echolocation.

Many belugas migrate as the sea freezes over in the Arctic. Animals trapped by ice often die and they are prey for killer whales, polar bears, and local people. They return to feed again in the spring, as the ice breaks up. They are seen near river mouths but may venture upriver. The animals feed on a variety of fish species such as herring and salmon, as well as mollusks and crabs.

The bowhead whale is the only baleen whale endemic to the Arctic and subarctic region. They are distinguishable by their massive, thick triangular skull which allows them to break through 20-centimeter-thick sea ice. The animals often accumulate scars on their bodies from breaking the ice. Scientists use unique differences such as these scars to identify individual whales.

Bowheads also have the largest mouth of any animal and can measure 5 meters in length and 4 meters in height. Research shows that these whales may break the record for the longest-lived mammals on Earth too; they can reach an age of more than 200 years. Unfortunately, these fascinating animals are exposed to a variety of human-caused stressors and threats, including hunting, pollution, and climate change.

Ribbon seals are native to Arctic regions and spend most of their life in cold waters. They form aggregations on the surface of the ice during spring to give birth, nurse pups, and molt. Consequently, these animals are sensitive to environmental changes that affect the extent of ice formation and breakup.

This species of seal is recognizable by its black skin with white markings. Pups have white natal fur and over the years, potions of the fur become darker and others brighter after every molt. The striped pattern emerges around the age of four. Adults can reach a length of up to 1.6 meters in both sexes.