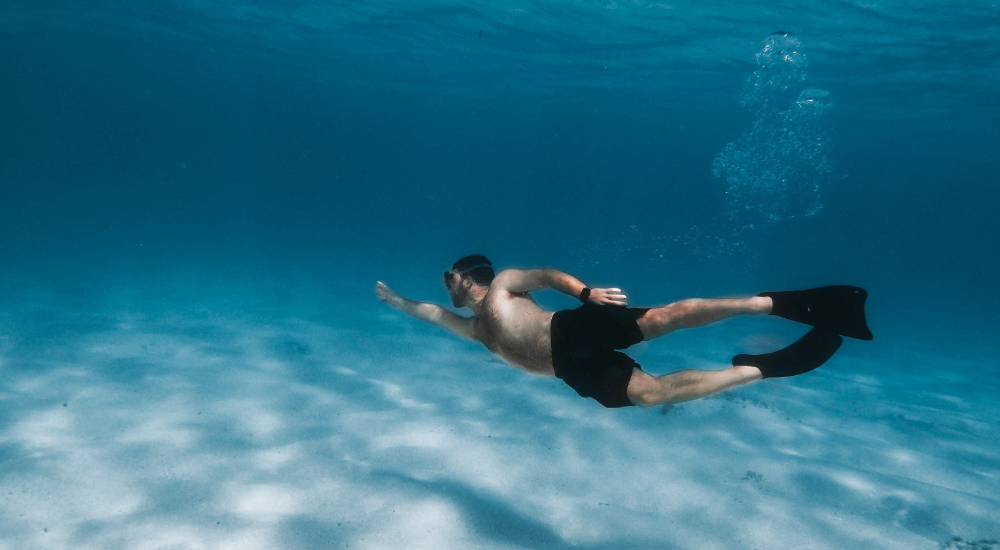 The mammalian diving reflex, or diving response, is a set of evolutionary adaptations that date back to billions of years ago when all life was aquatic. All mammals have the reflex to preferentially divert oxygen supplies to the heart and the brain during submersion. The diving response is very strong in water mammals, such as whales and seals, and it is the physiological adaptation that allows them to dive for food to great depths between surface breaths.

Scientists have also discovered vestiges of the mammalian diving response in humans. Despite the fact that many species of mammals have lost most of their biological ties to the oceans, humans and other terrestrial creatures are still inherently connected to our aquatic ancestors. The diving reflex is one of the features that allowed our ancestors to survive underwater and is still triggered when a mammal’s face comes in contact to cool water (below 21° C/70° F).

In warm water, the body’s need for oxygen is increased, which makes oxygen deprivation permanently damaging to the brain or even lethal. Immersion in cold water, on the other hand, decreases the body temperature and metabolism, reducing the tissues’ cellular activity, slowing the heart rate, and promoting unconsciousness. These effects are not imminently life-threatening. In fact, it is estimated that humans have a 75% chance of surviving a hypothermic coma. Today, therapeutic hypothermia is a treatment option used successfully to treat some cases of cardiac arrest and near-drowning, improving the rates of long-term neurologically intact survival.

The mammalian diving reflex is present in humans of all ages, infants included. In fact, the cardio-respiratory response is more intense in infants due to their higher metabolic needs and smaller body surface that leads to hypothermia much faster. During the first year of life, the diving reflex in infants can be fully elicited by merely immersing the child’s face in water without having them hold their breath. As an adult, the full effect of the diving reflex only triggers when immersing one’s face in cold water at breath-hold.

Today, babies are able to take part in reputable swimming classes designed to develop their water survival behaviors. Note that that inherent reflexes should not be relied on to save an infant from drowning and parents should remain vigilant when their child is around water.

The Physiological Reactions of Submersion

When a mammal’s face comes in contact to cool water, the receptors within the nasal and sinus cavities get activated. The diving reflex is hypothesized to aid in the preservation of oxygen stores for key organ systems during times of asphyxia. The brain and the autonomic nervous system, a control system that regulates bodily functions, receive information that the face has touched water and immediately close the airway. Other physiological changes that occur at this point include bradycardia, peripheral vasoconstriction, splenic contraction, and blood shift.

Bradycardia is the reduction of heart rate by about 10-25%. It occurs immediately upon even the slightest facial contact with water. Peripheral vasoconstriction is the narrowing of blood vessels to reduce blood flow. This is helpful because it helps conserve blood and oxygen for the vital organs of the body, such as the brain, heart, and lungs. Splenic contraction helps release red blood cells to increase blood oxygenation. Lastly, blood shift allows us to descent without crushing our chest. It occurs when peripheral vasoconstriction happens and can be described as the movement of the blood to the chest cavity in order to protect it from the increasing pressure while diving deep.

Why Is the Mammalian Dive Reflex Important for Divers?

Competitive freedivers can increase their time underwater through training, but for a group of Southeast Asian sea nomads known as the Bajau people, their ability to dive deep and for prolonged periods of time lies in a genetic change. The physical and genetic changes that have allowed sea nomads to dive deeper and longer are an example of our adaption to the environments we live in.

The Bajau people are nomadic and seafaring, living on houseboats and traveling from place to place throughout Southeast Asia. They visit land only occasionally and take all they need from the sea, surviving by collecting seafood from great depths. The Bajau dive repeatedly – anywhere from a few seconds to several minutes – for about eight hours a day and spend about 60% of their time underwater. They are able to dive at depths exceeding 70 meters, or 230 feet, using only wooden masks.

Researchers have found that the Bajau have larger spleens than those of related people from their region. As noted earlier, contraction of the spleen to release oxygenated red blood cells into the circulation is a key part of all mammals’ innate diving response. An enlarged spleen can presumably inject more blood cells into the circulation and provide more oxygen for basic body functions during prolonged submersions. It is believed that the gene responsible for the Bajau people’s larger spleen size is the PDE10A gene. In mice, this gene regulates a thyroid hormone that controls spleen size, supporting the idea that sea nomads have evolved the spleen size necessary to sustain regular dives.

The Mammalian Diving Reflex and Apnea

An associated reflex to the mammalian diving reflex is apnea, or the instinct to hold our breath when immersed in water. These two reflexes combine is what makes freediving possible. Holding one’s breath in a dry environment, or dry apnea, does not result in the same physiological reactions as wet apnea, which occurs upon submersion.

Submersion in water is necessary to trigger both the diving reflex and reflexive apnea. Furthermore, humans have been found to hold their breath for shorter periods of time on dry land than while submersed. It is believed that the explanation is partly rooted in the mammal diving reflex.

Apnea is essential to the mammalian diving reflex so that water is not inhaled into the lungs while also contributing to energy saving. And the reason why this additional reflex is so important is that, in response to apnea, the diaphragm and intercostal muscles experience a decrease in nerve stimuli, thus decreasing the consumption of adenosine triphosphate, a nucleotide that transports chemical energy within cells for metabolism.

As a natural response to submersion and descent, all divers will experience the mammalian diving reflex. Although the diving reflex is involuntary, research has shown that with experience, humans can significantly prolong the time they spend underwater while holding their breath. For freedivers, strengthening their diving response through training and stretching is beneficial to improving their diving abilities. This can be done by practicing freediving regularly, increasing the depth gradually, and stretching the intercostal muscles before every dive to strengthen the diaphragm and thoracic elasticity, among other methods of training.