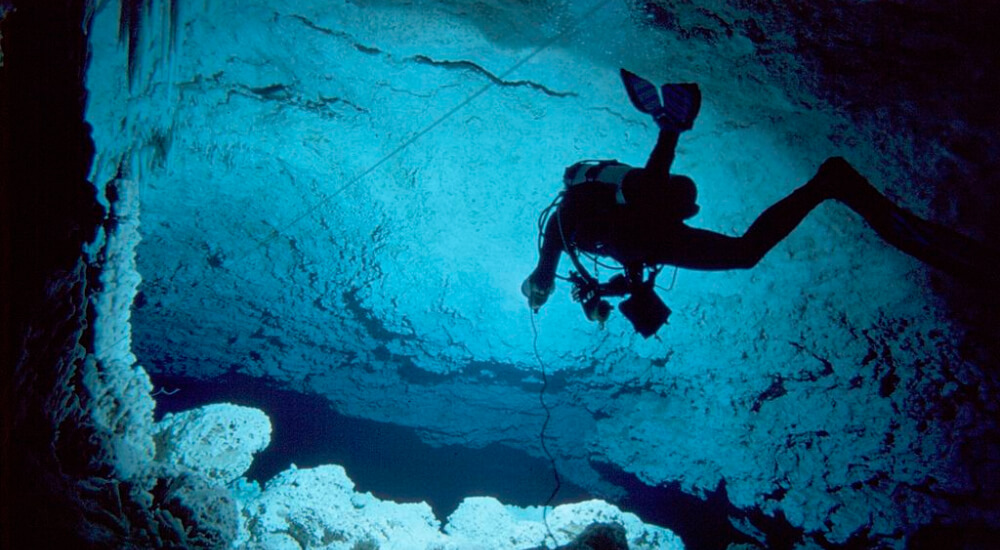 Cave diving is considered one of the world’s most dangerous sports. Divers must undergo extensive training to receive their cave diving certification due to the inherent challenges that come with diving in an overhead environment. Always looking to push their limits, cave divers often find themselves in risky situations. Even with today’s modern equipment and technology, dozens of people die each year in the dark chambers and passages of underwater caves. Below are some of the most dangerous cave dives on Earth, from which many have failed to return.

Considered by some the “Mount Everest” of cave diving, Eagle’s Nest is a seemingly ordinary pond in the Chassahowitzka Wildlife Management Area, but beneath the surface, divers can explore a sinkhole that descends into a system of wide underwater passages that reach depths of up to 90 meters (300 feet). The descent into the Nest goes through a “chimney” that opens up to a large cavern known as the “Main Ballroom”, beyond which lie a number of tunnels and crannies that go deeper. As one of the most dangerous dives on Earth, Eagle’s Nest has claimed the lives of over a dozen divers that overestimated their diving abilities. A number of factors contributed to these accidents, including failure to run a continuous guideline, loss of visibility from disturbing sediment, equipment failure, or failure to reserve enough gas for the ascent. Today, all divers must complete an online registration process, including a liability release form, prior to every dive.

The Diepolder Cave Systems consists of two large caves known as Diepolder II and Diepolder III, located on the Sand Hill Boy Scout Reservation. The Diepolder II is the deepest one, with a depth of about 110 meters (360 feet), but Diepolder III is not that far behind, with a depth of about 90 meters (300 feet). Due to the extreme depths and complexity of the cave system, access is controlled by The Florida Speleological Society. Divers who wish to explore these caves should meet the minimum requirements, which include being a certified Full Cave Diver with at least 100 cave dives in at least 5 different cave systems under their belt. Divers are also required to possess a Trimix certification. This is a state-managed and privately-owned site and as such, a guided program has been established to ensure the safety of the divers and to limit the negative impact to the cave systems.

Orda Cave is a gypsum crystal cave located underneath the western Ural Mountains. It is one of the longest underwater caves on Earth, measuring about 4,600 meters (15,000 feet). Thanks to the gypsum rocks, the water is incredibly clear, but also extremely cold, averaging only 4° C (40° F). The otherworldly topography has given rise to legends, including one of a spirit named “The Lady of the Cave” that takes the form of a maiden in white gown. She is said to protect and guide divers who venture into the Orda cave. Unfortunately, The Lady of the Cave cannot protect everyone. The cold water, sharp walls, and twisting passages make Orda one of the most dangerous cave dives in the world, dozens of divers having lost their lives while exploring this cave system. The Underwater Speleology Center Orda Cave requests all divers to send a request for diving and provide proof of their diving certification.

An artesian spring once revered by Native Americans, Jacob’s Well is now one of the most popular places to chill during the scorching Texan summer. While most people lounge around on the lip of the well, there are plenty of scuba diving and freediving daredevils who make their way to the underground chambers. Jacob’s Well is considered one of the most dangerous cave dives in the world because it’s easy to get disorientated when diving its tricky chambers, especially the third chamber which features a “fake” exit. Another dangerous feature of the cave is the so-called “Birth Canal”, a narrow opening that requires divers to remove their gas tank so they can squeeze their way through it. Furthermore, it takes up to five hours to dive all the way to the end of the main passage and the strong flow is something the divers struggle against. Jacob’s Well has claimed the lives of almost a dozen people, including scuba divers and freedivers, and many others have had near-death experiences.

The Mount Gambier region in South Australia is a popular destination for scuba divers due to the diversity of freshwater diving in caves and sinkholes, which are perfect for technical training and exploration. The Kilsby Sinkhole is a water-filled limestone cave, located on a privately-owned farm. The dive takes you down to about 40 meters (130 feet) in a spectacular boot-shaped sinkhole with crystal-clear water. Although it is not exactly that deep of a dive, there are lots of nooks and crannies and this is what makes the sinkhole so dangerous. Kilsby is open for scuba divers, freedivers, and snorkelers through an arrangement with its approved diving operators. Following the deaths of a number of scuba divers at Kilsby and the surrounding caves and sinkholes, The Cave Divers Association of Australia has lifted the standards for diving, so be sure to get informed about the requirements.

The Devil’s Spring system houses three separate springs: Devil’s Eye, Devil’s Ear, and Devil Spring (or “Little Devil”). Devil’s Eye Spring is a cylindrical limestone shaft located at the lower end of the Devil Spring, while the Devil’s Ear is a canyon-like opening found at the junction point of Devil Spring and the Santa Fe River. Certified cave divers are very familiar with Devil’s Spring, which is considered by many the most dived cave site on Earth. Even the famous conservationist Jacques Cousteau visited the springs and was stunned by the spectacular visibility of these clear waters. But each of the three systems presents unique challenges, with areas of shifting waters that act like currents and tiny passageways that can damage diving equipment. Over the years, both untrained and highly experienced cave divers have entered the cavern and cave areas and lost their lives in the springs, making this one of most dangerous cave dives in the United States. Today, there is a strict no lights rule in place. Only certified cavern and cave divers are allowed to enter the cave system while carrying lights. This rule was imposed to prevent uncertified divers from entering the overhead environments. Those who wish to dive the Devil’s Spring must abide by the Ginnie Springs Park dive rules and fill in a dive liability waiver form.

The Dangers of Cave Diving

Cave diving is one of the most challenging types of diving. It is a form of penetration diving, meaning that the diver cannot swim vertically to the surface and must swim all the way back out. This poses many risks due to the often complex nature of a cave system, with many passages, channels, and chambers. It is easy to get disoriented, especially in an emergency when one needs to resurface quickly.

Visibility can also pose issues, especially with cave diving where natural light cannot penetrate, as opposed to cavern diving where one is still able to see the natural light and exit vertically. Some caves have extremely poor visibility and sediments can further reduce it in seconds when stirred up. Caves are also known to carry currents, some so strong that, if not properly managed, can cause life-threatening risks for the diver.

However, the main reasons for cave diving accidents are small equipment malfunctions and navigational problems, which can be managed by proper training. A crucial rule is that divers should always stay within the limits of their training. Attempting to do a technical dive with an average recreational diving license is one of the main causal factors that led to many cave diving fatalities. With the right training, cave diving is not considered riskier than recreational diving.

Cave divers must undergo extensive training that takes an in-depth look at things like cave diving policies, equipment considerations, swimming techniques, physiology, accident analysis, diving etiquette, and other considerations. Diving organizations will issue licenses only to those that can demonstrate a substantial set of skills required to safely explore overhead environments, including proper deployment of a guideline, buoyancy control, anti-silting techniques, proper stress analysis, and specialized propulsion techniques. Do not attempt cave diving if you have yet to receive proper cave diving training and never dive alone in an overhead environment.