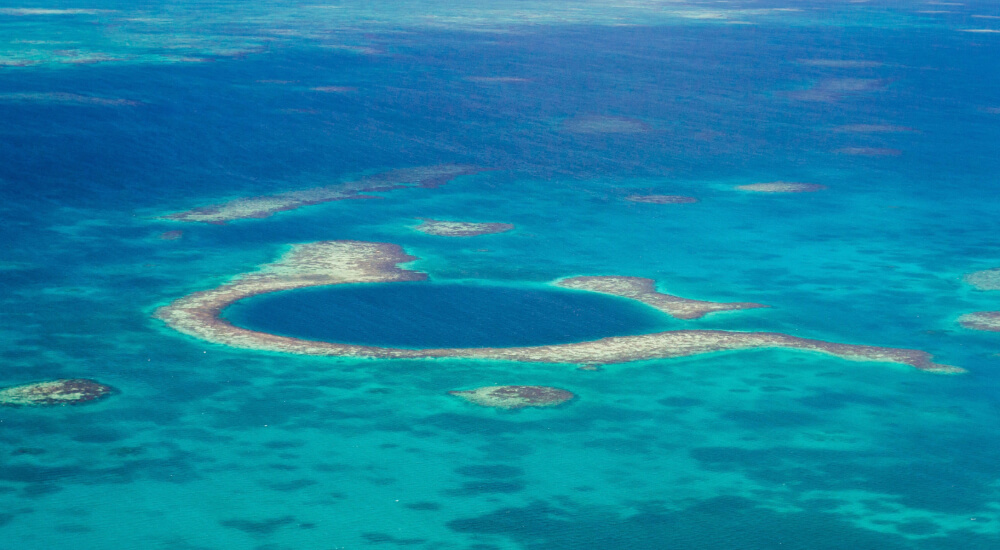 The Great Blue Hole of Belize is one of the natural wonders of the world. Sparkling curiosities ever since its rediscovery in the modern age, there is still much to be learned about this mysterious phenomenon. Recent exploration to the very bottom of the blue hole revealed interesting facts about this popular dive site that is so much more than meets the eye.

What Is a Blue Hole?

A blue hole is a subsurface void, or sinkhole, that has developed in a bank or island made up of carbonate bedrock. Blue holes are circular columns of water with steep-walled depressions. They are open to the surface and contain water of fresh, marine, or mixed chemistry. The water circulation in blue holes is poor and most are anoxic below a certain depth, creating unfavorable conditions for the development of sea life.

The striking blue color comes from the refraction and reflection of light in the water column. Other parts of the spectrum like red, yellow, and green lights get absorbed. The surface of the water in some of the sinkholes is dark or even muddy, but the deeper water is usually very clear, as divers can attest.

How Was the Great Blue Hole Formed?

The Great Blue Hole originally formed as a limestone cave during the last Ice Age when sea levels were much lower. During that time, the sea level dropped 106 meters (350 feet), leaving the nearby reef undermined by torrential rains. As the ocean began to rise, the cave flooded, and huge stalactites formed beneath the surface. Eventually, the roof of the cave weakened and collapsed, creating a vertical column in the ocean. With the melting of the ice caps, sea levels rose again and the sinkhole was filled with seawater.

Where Is the Great Blue Hole Located?

The Great Blue Hole is found 100 km (60 mi) off the coast of Belize, Central America. It lies near the heart of the Lighthouse Reef atoll and is part of the larger Belize Barrier Reef Reserve System, which was declared a UNESCO World Heritage Site in 1996.

How Deep Is the Great Blue Hole in Belize?

What’s at the Bottom of the Great Blue Hole?

If there’s something that puzzled divers and explorers alike is what’s at the bottom of Belize’s Great Blue Hole. Despite being one of the most popular dive sites in the world, this blue hole remains a mystery and much of it is unexplored even by technical divers.

In late 2018, a crew from Aquatica Submarines descended to the bottom of the Great Blue Hole in a mission to create a 3D map of the interior of the sinkhole. Using two submarines, the team collected footage of their descent and did a complete 360-degree sonar map. They were joined by Virgin Group’s Richard Branson, who is also the founder of Oceans Unite, and ocean conservationist Fabien Cousteau, grandson of renowned explorer Jacques Cousteau.

At the bottom of the Great Blue Hole, the team found the remains of crabs, conchs, and other sea creatures that had fallen over the edge of the sinkhole and were unable to crawl back up the steep walls. The sandy bottom presented a set of tracks made by the animals before they inevitably suffocated and died in the anoxic environment. The team described the site as a “conch graveyard”, and while it may sound grim, it is also an indicator that there is still a healthy population of conchs inhabiting the sinkhole.

The bodies of two lost divers have also been found in the sinkhole, of which the local authorities were notified. It was agreed upon that the divers would remain in their resting place, undisturbed. Among the findings was also a lost GoPro containing vacation photos. Finally, the crew made another stark discovery: plastic bottles – which Branson refers to as the “real scourge of the ocean” – were lying on the bottom of this deep blue hole.

Diving at the Great Blue Hole

The Great Blue Hole was made famous in the world of scuba diving in the early 1970s after ocean explorer Jacques Cousteau declared it one of the best diving spots in the world. Today, the numerous boats that travel to and from the Blue Hole attest to its popularity as a premier dive site. However, the depth of the site and the poor light require one to have good buoyancy and the ability to remain calm when diving in difficult conditions. Divers are instructed to remain close to the sides to prevent them from getting disorientated.

There is not much to see inside the Great Blue Hole in terms of wildlife, neither coral growth or fish. Life is restricted here by the lack of light, nutrients, and oxygen in its deeper parts. The walls are covered in algae, sea plants, and feather-duster worms. A few reefs with their resident fish can be seen around the perimeter of the Great Blue Hole, and it’s where you’ll find the snorkelers. But for divers, it’s the beautiful blue abyss that gets them excited.

Still, there are a few creatures that do occasionally pass by, such as the blacktip sharks, Caribbean reef sharks, hammerhead sharks, bull sharks, and giant groupers. However, divers should not set their expectations too high when it comes to the marine life at the Great Blue Hole, otherwise, they will just be left disappointed.

The highlights of diving at the Great Blue Hole are the ancient stalactite and stalagmite formations that advanced divers will get to admire once they reach a depth of about 35 meters (110 feet).  There are thousands of various-sized stalactites and stalagmites, some up to 12 meters (40 feet) in length. Surprisingly, small stalactites are found even towards the bottom of the blue hole, about 120 meters (390 feet) deep. This gives insight into the sinkhole’s past as a large, dry cave that was most likely filled with terrestrial life.

Other Interesting Facts about the Great Blue Hole

One thought on “The Great Blue Hole of Belize”