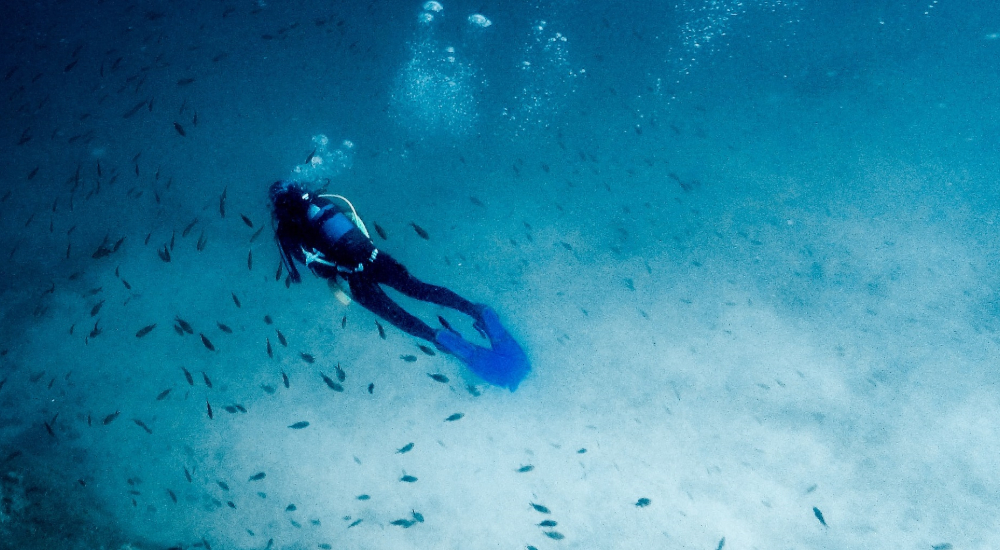 It’s now one of the main pieces of scuba diving equipment used by recreational divers, but did you know that the history of the wetsuit goes back to the mid-20th century when one physicist tried to figure out a way to improve the diving suit worn by frogmen on their missions? Read on to learn about the history of the wetsuit and the people that made it popular among watersports enthusiasts.

The Father of the Wetsuit

The history of the modern wetsuit – as we know it today – goes back to the early 1950s, when American physicist Hugh Bradner was looking for ways to improve on the equipment used by the U.S. Navy. Bradner worked at the US Naval Ordnance Laboratory during World War II and after the war, he took a position at the University of California, Berkeley, where he studied the issues encountered by frogmen diving in cold water for extended periods of time. Bradner himself wasn’t a stranger to diving as his job at the university required him to do a number of dives.

Bradner believed that as long as the fabric of the suit is insulative, a thin layer of trapped water between the fabric of the suit and the skin could continue to act as thermal insulation. The water would reach skin temperature very quickly and the trapped bubbles of air in the fabric would help maintain an optimal temperature. Willard Bascom, a research engineer at the Scripps Institution of Oceanography, suggested neoprene as a feasible material for the suit material.

Bascom and Brander attempted to patent their wetsuit design in 1951, but the application was rejected. The United States Navy was also not interested in their neoprene wetsuit due to concerns that the bubbles of gas in the neoprene might make it easier for the naval divers to the detected by sonars. Bradner and his company, EDCO, ultimately went on to sell the wetsuits in the consumer market but failed to reach the levels of success of other wetsuit manufacturers.

Other Important Figures in the Industry

By 1952, surfer-turned-businessman and former Navy pilot during WWII, Jack O’Neill, opened his first surf shop in San Francisco and started manufacturing his own wetsuits. His wetsuits, initially intended for surfers, became very popular among scuba divers. Although O’Neill is widely credited for inventing the neoprene wetsuit, he is merely the one that made them famous.

The manufacturing of the first neoprene wetsuit has also been attributed to the Meistrell brothers, investors of Dive N’ Surf and founders of Body Glove. They are viewed as the developers of the first commercial wetsuits made of neoprene, back in 1953. The dive shop owners created a lighter, more flexible wetsuit, and sold it under under the label Thermocline until changing the name to Body Glove because they felt like their wetsuits “fit like a glove,” as Bill Meistrell used to say.

Nonetheless, despite the controversy surrounding who was first to design a practical wetsuit, Brander remains the “father of the wetsuit.” A research paper published by Carolyn Rainey at the Scripps Institution of Oceanography provides corroborating evidence of his pioneering invention.

How Wetsuits Were Made

Originally, the wetsuits were made only with sheets of foam-rubber or neoprene. Because they did not have any backing material, the wetsuits were very fragile, and extra care while pulling it was required so that it wouldn’t tear. Nylon cloth was used as the first backing material, but it was added only to one side of the neoprene. Double-lined neoprene was first produced in the 1970s and it helped increase the protection and tear-resistance of the neoprene.

The sewing process was also very simple in the beginning. Manufacturers would take two sheets of neoprene and sew them together by overlapping the edges. Unfortunately, the punching holes allowed water to flow in and out of the suit. Furthermore, with continuous use, the needle holes became enlarged. When the backing material was introduced, the holes only stopped enlarging with use, but water was still flowing through them.

Seam taping was developed in the 1960s and it helped solve the issues posed by the needle holes. The process was also quite simple: a strong nylon cloth with a thin waterproof rubber backing was applied across the seam and then joint together using a chemical solvent or a heat-sealer.
Seam gluing was also an alternative and it involved gluing the edges of the suit together. Unfortunately, these wetsuits were still prone to tearing because the glue could not create a strong bond.

The revolutionary technique that changed the wetsuit manufacturing industry is blind stitching. The blind stitch sewing machine uses a curved needle that can sew together the sheets of backing material without punching a hole completely through the neoprene. This sewing technique also allowed the material to lay flatter and closer to the skin, making the wetsuit more comfortable to wear. Blind stitching quickly became the preferred method of sewing wetsuits.

Over time, manufacturers added further improvements to the wetsuit designs, experimenting with different materials to improve the design of the suits. In 1989, Body Glove invented the non-zip wetsuit. Highly elastic fabrics were used to replace the plain nylon backing which made the neoprene very stiff. By combining neoprene with different materials such as spandex and wool, manufacturers managed to add additional warmth and flexibility to their wetsuits. With the advances in backing materials and blind stitching, single-lined neoprene made a comeback. Titanium was also added to some wetsuits in the ‘80s to reflect heat and built up insulation.

In 1981, Tony Farmer of Sports Suits of Australia invented the dive skin, or sports suit, which works in the same way as the wetsuit. The suit was originally developed as a protective garment for swimmers, but it quickly became popular among divers exploring the warm tropical waters. This “mini-wetsuit” is made of spandex and provides protection from corals, jellyfish stings, blisters, and sunburn as well as a bit of warmth. However, it can only keep a diver about 25 percent warmer than without a suit.

A lot has changed in the past years in the wetsuit manufacturing industry. Different wetsuit designs are now available for each type of watersport. Wetsuits are also categorized based on temperature ranges, mobility levels, and surface finishes. Gender-specific wetsuits come in a multitude of styles, colors, and trims.

Today, the biggest challenge facing wetsuit manufacturers is how to make them more environmentally friendly. In recent years, limestone became an important source for the carbon used to make more eco-friendly neoprene. Some companies are also producing suits made from naturally occurring rubber or recycled materials, but there’s still a long road to go until more sustainable wetsuits hit the mass market.