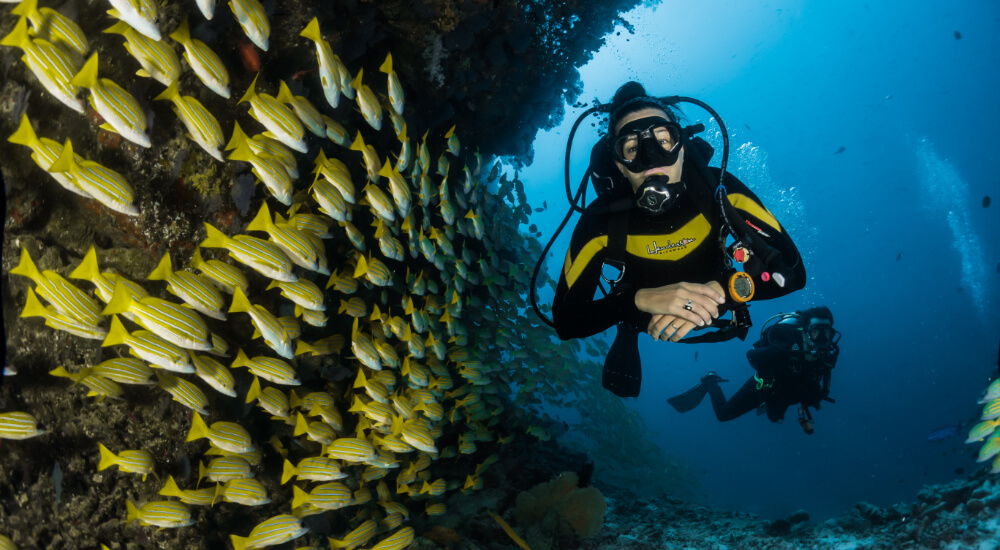 Scuba diving and snorkeling are popular holiday activities in most parts of the world. As an important tourism market, the scuba diving industry generates billions of dollars yearly. Millions of certifications are issued globally every year, but while the industry is thriving, can the same be said about the overstressed ecosystems? The fragile marine ecosystems are at risk as the ecological pressure on the environment increases. Luckily, there are a few things both divers and dive operators can do to protect the environment, which is to practice and promote sustainable diving.

The Impact of Diving on the Marine Environment

About 75% of coral reefs throughout the world are currently threatened by both local and global stressors. Unfortunately, diving is also part of the problem. The negative effects of diving activities are mostly caused by mass tourism. Heavily dived sites show reduced coral cover and changes in the coral structure, loss of species diversity, with reefs dominated by resilient corals that can withstand various stressors.

Divers damage the fragile corals through breakage and tissue abrasion, which may sometimes result in further reef degradation. What’s more, when divers swim too close to the corals, they may stir up benthic sediment which in turn subjects the coral polyps to increased sedimentation loads. The majority of divers that injure coral reefs are unaware of the impact of their destructive behavior and not all dive operators raise awareness on the issue. Furthermore, dive operators can also impact the reef communities through actions such as anchoring on reefs, altering the quality of the water through nutrient enrichment and pollution by toxic substances.

How to Practice Sustainable Diving

As a diver, you have the option of choosing the dive shop or liveaboard that will take you out to sea. Choose those that demonstrate sustainable diving practices. Plenty of dive centers operating in some of the best diving destinations in the world are part of the Green Fins family, an initiative that aims to protect and conserve coral reefs through specific guidelines that promote sustainable diving and snorkeling. Members of the Green Fins community are assessed and certified annually to ensure they follow their Code of Conduct.

You can also get an idea of your dive operator’s ethics by how they promote their business. Do they practice baiting? Do they promise close interactions with the fish? Or are they rather involved in local environmental conservation projects and ocean debris cleanups?

According to pilot research by The Reef-World Foundation that assessed the behavior of 100 recreational scuba divers of all levels of certifications, almost 46% of diver contacts with the reef were made with their fins. To improve poor finning techniques, it would be best to practice two of the top techniques used by technical divers: frog kick and back kick. The frog kick not only allows divers to propel through the water easier but also helps them from kicking the reef, sand or silt. The back kick facilitates backward motion and offers the same advantage of moving without disturbing the surrounding environment.

Buoyancy is one of those key skills every scuba diver needs to learn and perfect. It’s important to master good buoyancy so you don’t destroy the fragile underwater environment. A number of major diving training organizations such as PADI and SDI offer buoyancy courses. These specialty courses were designed not only to allow divers to observe marine life without disturbing their surroundings but also to help them save energy and air use, move more efficiently underwater, and determine the exact weight they need for optimal buoyancy.

Touching the beautiful and intriguing marine creatures you meet on your dives may be tempting, but this can cause stress or far more damaging effects for the animals. Many species of fish secrete a protective mucus on the surface of their skin, which can be altered by a simple touch, therefore making the fish more vulnerable to different exterior contaminants. Some animals are very fragile and just by touching them, humans can damage their delicate structures. The same goes for coral reefs, which are not only living animals but also marine habitats for other species that rely on their existence.

Diving gloves are a useful piece of equipment because they help protect the hands from abrasive surfaces such as rocks and wrecks. They are also used for thermal insulation in colder waters. While there’s no denying the benefits you get from using them, it is also a fact that some divers may use diving gloves in situations where they’re not exactly a necessity. The issue with these gloves is that they provide a false sense of security and divers may feel tempted to touch the reef knowing there are fewer chances of suffering lacerations. Many dive locations such as Cozumel and the Cayman Islands have banned the use of gloves due to the poor behavior exhibited by some of the divers.

According to the same study by The Reef-World Foundation, 77% of the diver-reef contacts with the reef were made with a photo/video camera, accounting for the highest proportion of contacts resulting in damage to the natural environment. The use of cameras underwater can not only cause coral breakage but can also cause stress for the animals. Anyone using a camera system underwater must develop superior buoyancy control skills. Good buoyancy allows underwater photographers to hover and hold any position and to reduce air consumption, meaning more bottom time for picture-taking.

According to a research paper published in the journal Archives of Environmental Contamination and Toxicology, about 14,000 tons of sunscreen enter the oceans each year. Common ingredients in sunscreen such as oxybenzone, butylparaben, octinoxate, and 4-methylbenzylidene camphor have been shown to cause coral bleaching and damage to the coral DNA. Many places around the world such as the state of Hawaii and the island nation of Palau have announced they would ban the use of sunscreen known to contain chemicals harmful to coral reefs. Divers are part of the group of people responsible for this contamination, but there are ways to prevent causing further harm. There are plenty of reef-safe sunscreen options that contain certified natural and organic ingredients marked safe for coral reefs.

Collect the Trash You Find on Your Dives

Environmental protection starts on land, but there is one simple thing all divers can do underwater, and that is collecting trash. Marine debris removals are simple; even a beginner diver can pick up a small piece of plastic and stuff it in their BCD pocket and dispose of it appropriately on land. Larger items like nets and traps should only be removed by divers with proper training in removing debris.
Do note that if an object, regardless of its size, is encrusted with marine life or supports life in any way and removing it would cause them more harm than good, then it would be best to leave it underwater.

Explore the underwater world in a respectful manner and teach others about the importance of protecting and preserving the unique ecosystems found in oceans and seas. If you notice any illegal activity on your local guide’s or dive shop’s part, report it to the authorities. Only by raising awareness to the current issues and encouraging sustainable diving can real change be made.