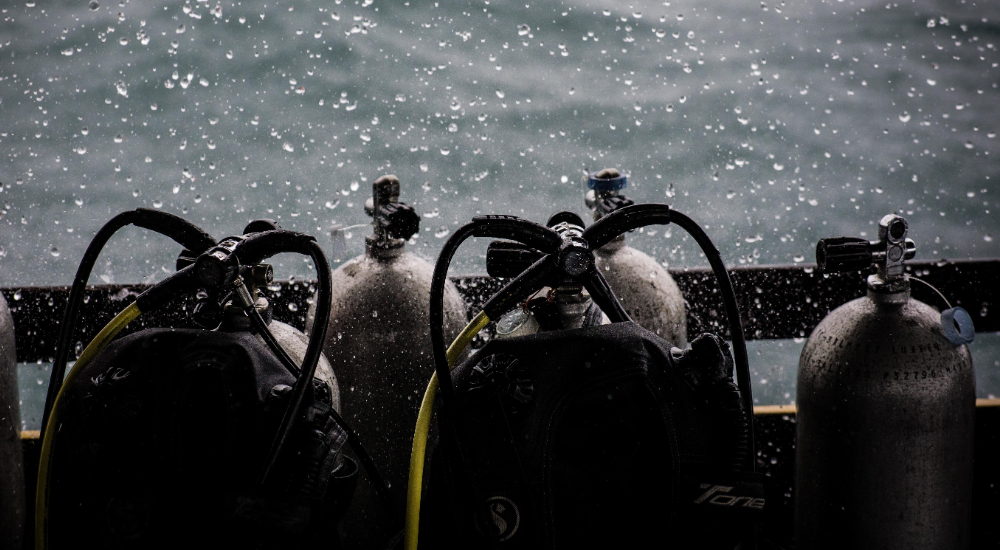 The most common of the breathing gases is compressed air (filtered and dehumidified), which is a mixture of 21% oxygen, 78% nitrogen, and 1% other trace gases. Since it falls within the limits of recreational diving, unlike specialized mixtures, it does not require additional training. However, once you reach a certain level of experience and confidence, you may want to dive into the world of diving gas mixes. And here’s why.

Due to its nitrogen content, divers breathing air may experience nitrogen narcosis, which is why it can only be used up to a maximum depth of 40 meters (130 feet). Mild impairment may occur at a depth of only 30 meters (100 feet), with progressive impairment of function as one descends. The nitrogen that dissolves in the tissues at depth needs to be liberated on ascent. For deep or long dives, additional decompression stops may also need to be performed to allow the gas to be released.

Luckily, there are other alternatives to atmospheric air for those that wish to dive deeper or to increase their bottom time.

Nitrox, also known as Enriched Air Nitrox (EAN), is a mixed gas consisting of nitrogen and oxygen that was developed to reduce the risk of nitrogen narcosis and decompression sickness associated with compressed air. Unlike air, which contains about 21% oxygen, nitrogen has a minimum of 22% and a maximum of 40% oxygen. Most scuba divers use the 32% or 36% oxygen mix.

Nitrox is a favorite among divers because it allows for increased bottom time. There is also the myth that it allows one to dive deeper, which in fact is exactly the opposite. Nitrox restricts the maximum diving depth due to the risk of oxygen toxicity at high pressures. As such, the higher the percentage of oxygen, the shallower the dive should be.

Two factors must be considered when using Nitrox: the pressure of oxygen in the lungs and the length of the exposure. These two factors make up the oxygen limit. Certified Nitrox divers learn to calculate and manage their exposure to oxygen while dive tables and dive computers provide all the necessary information to dive safely on Nitrox.

A diving gas mixture used for technical and commercial diving, Trimix is a mix of oxygen, nitrogen, and helium. Replacing part of the oxygen and nitrogen with helium allows one to go beyond the limits of recreational diving with less risk of oxygen toxicity and nitrogen narcosis.

Helium is an inert gas, it does not react with the human body at conventional depths, so it allows divers to keep a clear head. And with a Trimix certification under your belt, you can dive as deep as 90 meters (300 feet) or beyond. The most common Trimix mixture comes with 44% nitrogen, 35% helium, and 21% oxygen.

Helium is a light gas and provides less breathing resistance at depth. It also enters and leaves the body tissues more rapidly than denser gases at increased pressures. At the same time, the tissues can not support high amounts of helium when supersaturated. Helium is also quite costly, its price steadily increasing over the last 20 years.

HeliAir, sometimes referred to as “poor man’s Trimix”, is a breathing gas mixture consisting of helium and air, the latter actually being made up of only oxygen and nitrogen. While the same three gases are also found in Trimix, Heliair is different because it is mixed differently. Trimix is blended by decanting helium and oxygen into the scuba tank and then topped off with air. HeliAir, on the other hand, is blended more easily by filling the scuba tank with the desired amount of helium and then adding air. Consequently, air has a fixed 21:79 ratio of oxygen to nitrogen before being added to the tank.

Used mostly in deep commercial diving and sometimes by rebreathers, Heliox is a mixture of oxygen and helium, so as opposed to Trimix, it lacks the nitrogen component. The proportion of oxygen in the mix depends on the maximum depth one needs to reach, but it is often less than 21%. Neither Heliox nor Trimix offer real advantages for recreational divers, and it’s also debatable whether one is more superior than the other when it comes to technical and professional diving.

Heliox is more expensive than Trimix. Helium is also a rapidly diffusing gas that results in longer decompression requirements, so Trimix may be favored because it contains a lesser amount of helium. However, Heliox is considered superior to Trimix for rebreather deep diving because it poses zero risk of nitrogen narcosis and it provides an even less breathing resistance.

Nonetheless, one reason to use nitrogen in deep diving gas mixes is to reduce the risk of high pressure nervous syndrome (HPNS), a neurological and physiological disorder that may occur when a scuba diver descends below 150 meters (500 feet) using a gas mixture containing helium. The effects and their severity partially depend on the percentage of helium used in the mix.

An interesting and fun fact about this breathing gas mixture is that sound travels faster in Heliox than in air, so voice formats are raised, making the divers’ voices very high-pitched and hard to understand. For this reason, surface personnel often have to use a device known as a dive control helium speech unscrambler which electronically lowers the pitch of the divers’ voices.

Hydrox is a mix of hydrogen and oxygen used in very deep diving. It is one of the relatively new deep diving gas mixes and is used predominantly in commercial diving beyond the limits of Trimix or Heliox. Since hydrogen is cheaper, Hydrox is a more affordable alternative to Heliox. It also has little to no toxicity and can be used at depths of several hundred meters.

The main issue with hydrogen is its extreme flammability when the breathing gas mixture contains more than a few percents of both hydrogen and oxygen. Furthermore, while it is also the lightest gas, even lighter than helium, hydrogen still has some narcotic potential and may cause hydrogen narcosis. But as with Heliox, Hydrox is used to combat high pressure nervous syndrome during very deep dives.

Hydreliox is a breathing gas mixture containing hydrogen, helium, and oxygen. It was created to help eliminate the risk of hydrogen narcosis associated with breathing only hydrogen-oxygen mixes. Hydreliox is  used primarily for scientific deep diving below 130 meters (430 feet) to combat the risk of high pressure nervous syndrome.

In a 1996 experimental study promoting the use of hydrogen in diving, Hydreliox has been tested to simulated depths of over 700 meters (2,300 feet) in living chambers. Four professional divers made daily 6-hour excursions over the course of eight days breathing a Hydreliox mixture.  The psychometric tests run with Hydreliox showed no signs of hydrogen narcosis and the divers’ performance improved with depth.

Note that you can’t use either of the diving gas mixes above without prior specialized training. There are a number of risks associated with using these mixtures and even the smallest difference in gas concentration can affect a dive. Most of the major diver training organizations such as PADI, NAUI or TDI/SDI, as well as the local technical and commercial diving training schools throughout the world offer courses catered to those that wish to try other breathing gases than compressed air.