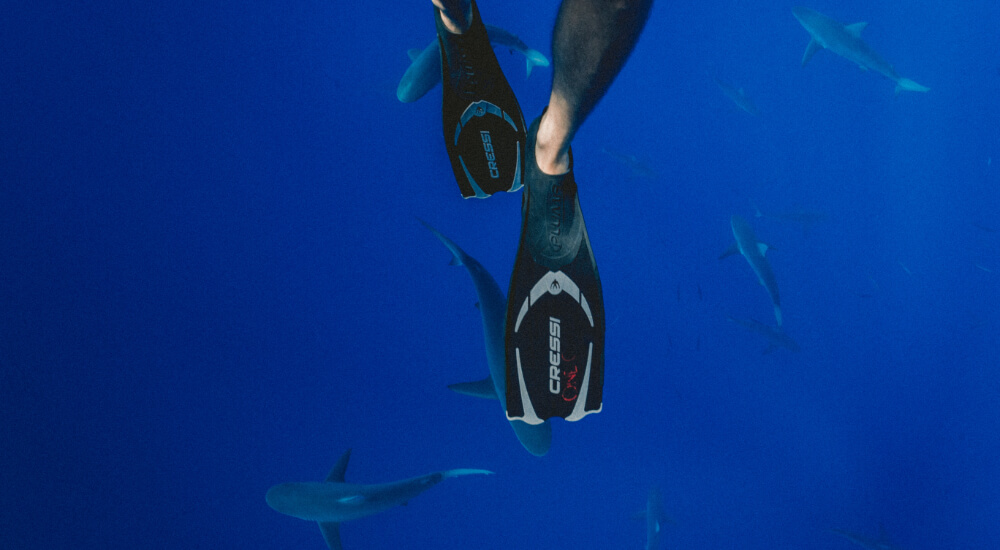 Diving with sharks is high up on many divers’ bucket lists, but they don’t exactly have the greatest of reputations. Attacks on surfers are common news, but what about scuba divers? Do sharks attack divers and should we be scared to get into the water with them? Let’s have a look at the statistics and what the experts are saying.

Yes, sharks do attack divers, whether provoked or unprovoked. However, attacks are extremely rare, as sharks don’t view scuba divers as a particularly appetizing prey. As such, diving with sharks is not considered a dangerous activity, although some encounters can pose more risks than others.

Most sharks are cautious of divers although, over the years, sharks have become bolder around people because of baiting. Since some dive operators use fish to attract the sharks, the latter may associate the arrival of the dive boat and the splashes made by scuba divers with food.

A Look at the Shark Attacks Statistics

According to The International Shark Attack File (ISAF), the only comprehensive database of all known shark attacks in the world, there were 137 different types of incidents involving sharks in 2021. Of the total number of alleged shark-human interactions, 73 were unprovoked attacks and 39 were provoked attacks.

According to the same 2021 report by ISAF, of the total number of 137 incidents, only 4% involved individuals involve in snorkeling&diving-related activities. Most of the victims were attacked during activities such as surfing/board sports (51%) and swimming/wading (39%).

A report by the Divers Alert Network Asia-Pacific Foundation and Department of Public Health and Preventative Medicine at Monash University on the fatal shark attacks on divers in Australia from 1960 to 2017 shows how statistically safe diving with sharks is. Of the total 187 shark attacks recorded over the 57-year period, 112 victims were snorkelers, 62 scuba divers, and 13 were using a surface-supplied breathing apparatus.

The attacks resulted in 28 deaths, most of the victims being snorkelers (13), followed by scuba divers (8) and divers using surface-supply (7). The same report notes that shark attacks on divers represent only 3% of the total number of diving-related fatalities recorded from 1960 to 2017 in Australia.

Past and Future Trends

As the worldwide human population and its interest in aquatic recreation continue to rise, the number of shark attacks is also expected to rise, as it is highly influenced by the number of people entering the water.

Data from the International Shark Attack File (Note: Some decades may include incomplete data, either because of unreported attacks or the lack of funding to support the ISAF during certain periods in time.)

Where Do Most Shark Attacks Happen?

The majority of the unprovoked shark attacks worldwide in 2021 occurred in the United States (47) followed by Australia (12). Florida tops the charts for worldwide unprovoked attacks with 28 cases. In fact, the state’s New Smyrna Beach is dubbed as the shark attack capital of the world. Florida is followed by Hawaii with 6 cases and California with 3 cases. Other nations – including the Brazil, Canada, and Ecuador – reported only a few cases of shark attacks. Nine of the total number of 73 unprovoked attacks resulted in fatalities.

In the United States, more shark attacks occur in the Atlantic Ocean than in the Pacific Ocean. A reason for this may be the water temperature, as more attacks tend to occur in warmer water and during warmer months when beachgoers and water sports enthusiasts head for the waters.

There are over 400 species of sharks living in the world today, but most of these species are found outside the usual diving areas. Furthermore, only a few of these species can be considered real threats to humans. The species involved in most of the fatal and non-fatal shark attacks worldwide are great white, tiger, and bull sharks. These species of sharks tend to be very territorial, and some of the attacks are simply warnings to get out of their space.

Which Shark Has more Attacks on People than any other Type?

The great white shark (Carcharodon carcharias) has been reported to be involved in the majority of attacks on humans. It is the world’s largest predatory fish and can weigh up to 1,900 kg (4,200 pounds). Great whites are curious creatures that are believed to sample bite their victims in search of new potential prey. Biologists point out that many of the attacks are just cases of mistaken identity.

Great whites usually release their victims, as human meat is not something they particularly like. Therefore, an attack does not always result in a fatality and no, they’re not as menacing as depicted in the movie Jaws. They are usually found in the pelagic zone or open waters but sometimes come close to shore which is why there are so many recorded attacks on surfers.

Why Do Sharks Attack?

The reality is, most sharks are just as – if not more – scared of people as some people are scared of them. The number of worldwide attacks has increased over recent decades, but the reason for this is tourism. Each year, more people get engaged in water activities which only means they’re invading the sharks’ “home”.

There are, of course, other reasons why these predators attack, one big reason being hunger. Some species feed on large marine animals, so humans can look like their regular prey. It’s a fact that most sharks attack those partaking in a board sport, most often surfing. From below, a human on a board looks just like a seal which is among sharks’ favorite prey. In addition, surfers make splashing noises that a shark may mistake for a struggling fish. Sometimes, a shark will bite if it chases its prey and a human gets in the way of their food.

Sharks may also attack when provoked. A provoked attack is defined as any physical contact that resulted from the pursue, grabbing, cornering, striking or any other form of harassment inflicted upon the shark by a human. Sometimes, humans inadvertently provoke an attack.

Are Sharks Attracted to Period Blood?

A question often on the lips of women participating in water sports is whether or not sharks can smell period blood. Sharks are famed for their keen sense of smell, but new research showed that this may be just a myth and they are not necessarily better sniffers than other fish. But even if they indeed have a heightened sense of smell, menstrual fluid is still not a trigger, as it contains more than just blood and is released by the human body in small quantities over a number of days. Scientists point out that sharks are far more interested in the amino acids from the blood and guts of marine animals.

One event took place on a submerged dive cage of the luxury vessel Nautilus Explorer. After being lured near the cage, a 15-foot great white known as “Milana Arnone” became trapped in the cage with the divers, severing the divers’ air supply. Luckily, the animal and the divers were freed from the cage with no injuries, but this and other similar incidents have raised the question of whether or not cage diving should be outlawed.

How to Avoid a Shark Attack while Scuba Diving

Over the years, sharks have gained quite a bad reputation. In reality, they’re most often the victims. It is estimated that up to 100 million sharks are killed by humans each year through commercial and sport fishing. In their natural habitat. In contrast, sharks kill a few dozen people each year after the latter enter what it is rightfully the sharks’ space. Shark attacks are rare on any group of people, whether they’re scuba diving, fishing, or involved in any other water activity.

0 thoughts on “Do Sharks Attack Divers? Facts and Figures”