The USS Oriskany, or the “Mighty O,” is one of the largest artificial reefs in the world and one of three diveable aircraft carriers in the world along with the USS Saratoga in the Bikini Atoll and the HMS Hermes in Sri Lanka.

Some of the wildlife you can spot while diving here includes eagle rays, tuna, goliath groupers, snappers, and amberjacks. Even whale sharks and manta rays have been seen here. 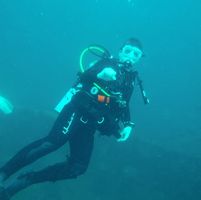