Olympia Maru, also known as Morazan Maru or Tangat wreck, is a former Japanese army cargo ship that sunk during WW2 by U.S. aircraft. The wreck is located on the south of Busunga Island and west of Tangat Island.

Having been in the water since 1944, the ship is covered in extensive hard and soft coral growth. Olympia Maru lies intact on its starboard side in water up to 24 meters deep (79 feet). Visibility ranges from 5 to 15 meters (15 - 50 feet).

This is a large ship, measuring 112 meters (367 feet) in length and, as such, those who wish to penetrate all its cargo rooms will need to perform at least two dives.

Scorpion fish are among the most common creatures you can spot hiding all over the wreck. Other marine animals you can see here include lionfish, crocodile fish, razorfish, glassfish, batfish, damselfish, golden rabbitfish, fusiliers, groupers, bream. 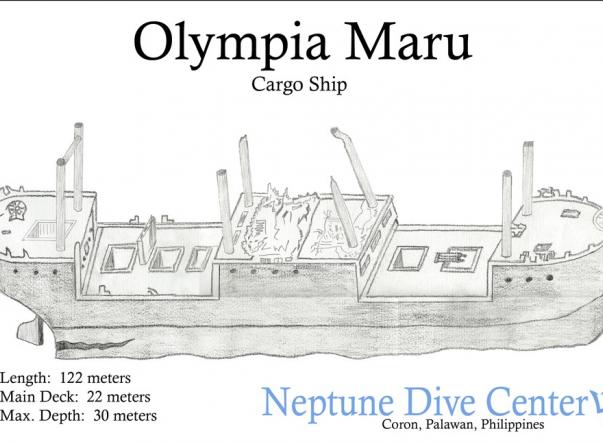 Located at Coron Palawan on Busuanga Island in the Philippines, diveUNDA offers an array of exceptional live-aboard diving oportunities. From the many WWII Japanese shipwrecks to Apo Reeg - the largest reef in Asia and the second largest in the world, cave diving and countless coral reefs, all in the crystal clear waters of the Calamian Group of Islands. Operating budget multi-day live-aboard adventures to all the best dive sites. Choose one of DiveUNDA's regular adventures leaving from Coron or create your own unique liveboard experience to your desired destinations by Charter. You can do your PADI Open Water Diver, Advanced Open Water Diver or PADI Speciality courses while aboard.

Sangat Island Dive Resort has a comprehensive on-site dive facility fitted-out with all the equipment you’ll need for any underwater adventure during your stay. Newly rebuilt in 2008, the facility offers a wide range of first-quality equipment (tanks, wet suits, masks, fins, dive computers, and more) from internationally-recognized manufacturers as well as an air and Nitrox filling station (powered by dual BAUER K14 compressors) and a brand new LW 280 unit which is combined with a 280 Coltrisub nitrox membrane. Not sure what you’ll need? Can’t decide which scuba or snorkeling site to explore first? Thinking about learning to scuba? No problem. This knowledgeable dive center attendants and on-site PADI and SDI instructors are happy to help you with equipment selection, scuba course options, dive site recommendations, and more.

Discovery Divers was founded in 1989 by Gunter Bernert as former ASIA DIVERS, Coron. The new Dive Center and Outlets at the Puerto Del Sol, AlFaro Palawan Resort and Busuanga Bay Lodge, located at the Maritime Resort Community are owned and managed by Gunter Bernert and his daughter Karina Bernert. The location is perfect, just a view minutes away from most of the major dive sites and the World Prominent Wrecks of Busuanga.

Featuring a seafront area for guests, Discovery Island Resort and Dive Center provides spacious rooms with a sea view balcony. It has its own bar and restaurant and provides free WiFi in the common areas. Located in Coron, Discovery Island Resort is located on a 7-hectare island and it is just a 5-minute boat ride from Coron Town. The MDI Dive Center (formerly “Discovery Divers Coron”) is a full-service Dive Center under Swiss Management with more than 15 years experience in Coron. The Office is located in the Center of the uprising, beautiful town Coron at Busuanga Island, which belongs to Palawan – Philippines.

Umali Dive Center strives to be the leading Dive Shop in Coron and nearby areas, sharing the diving skills and giftedness in providing quality service that exceeds the expectations of their esteemed customers.

Scuba Diving in Coron, Palawan has something to appeal to almost any diver. Whether you are a Pro with thousands of dives, or just learning the basics, Coron and Neptune Dive Center has something for you. Coron has long been known to be the "Wreck Diving Capital" of the Philippines. They also have beautiful reef sites teeming with fish, loads of macro, resident turtles, caverns, and a thermal lake that is out of this world! Neptune Dive Center was built by Divers for Divers. They are not one of the big guys, and they don't want to be. They want fun, personal, and safe diving.

From 8 incredibly WWII Shipwrecks & 6 wonderful Reefs within 30min, to a fun & professional dive-team, to a great dive-atmosphere—Chindonan Dive Resort makes it fun, safe & convenient for beginners, advanced and professionals to dive the beauty of Coron Bay. Just off Chindonan shoreline your snorkeling adventure starts - 600 meters of beautiful reef and a bay with Seahorses well camouflaged among seagrass. Hire a boat or take a kayak and go explore other prestine snorkeling areas around Chindonan Dive Resort. The beauty of the underwater world is hard to resist here.

Pirate Divers Concepcion diving center is located 40km outside of Coron in the little town of Concepcion, Palawan, Philippines (very close proximity to the wrecks and beautiful white sand beach islands, only 15-40 minutes by boat to all the dive sites, compared to a 2hr trip from Coron itself). The owner Mary Jane Almarez, a local from Coron, who knows the area and can help out with with all your needs during your stay. Scuba Diving Instructor Simon Mowbray, from Worcester England, an ex Army diver who came to Busuanga in 2013 and never left.

Reggae Dive Center is a full-service Dive Centre located in the uprising, beautiful town of Coron, Palawan, Philippines. The service includes personalized and friendliest scuba diving experiences for individuals and groups. Thr dive shop is equipped with 40 rental-sets. The 12 and 15liter Alu-Tanks come with Dual Adapters (INT and DIN). 7liter Pony bottles are available for decompression dives or children diving. They are offering special sizes and cuts of wetsuits for women, 8 dioptric lens masks and Sidemount equipment. The Compressor can fill up to 40% Nitrox. Reggae Dive Center offers daily dive-trips to the 10 famous Japanese WWII Wrecks of Coron Bay, several Reef dives and Dive Tours to the unique Barracuda Lake. They operate the dive-trips with their three new rebuilt bangkas “Dos Hermanos”, “Three Little Birds” and “Emily Sampaguita”.
✕