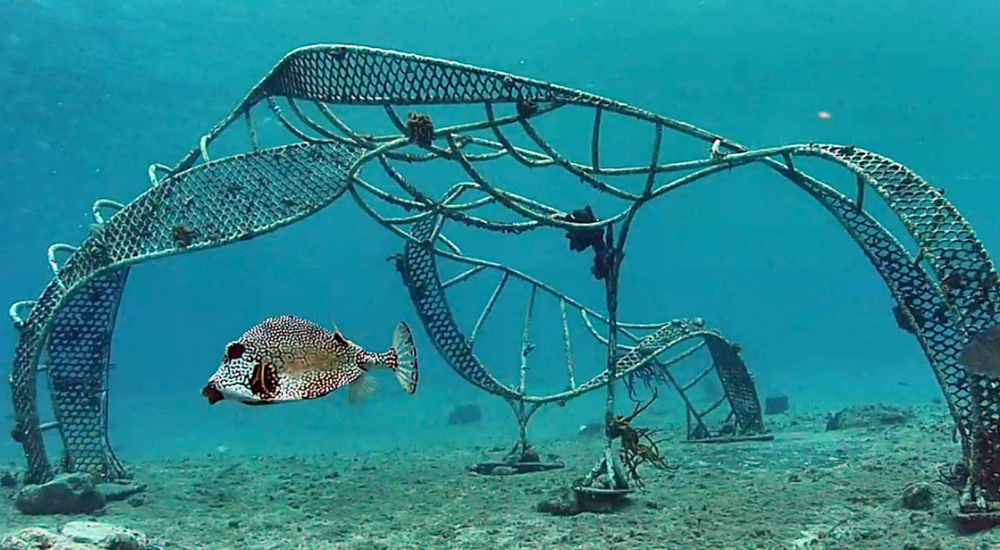 Can humans creatively influence climate change? With coral reefs in decline due to climate change, ocean acidification, pollution, run-off, development, overfishing, and disease, it’s our duty to find effective solutions to these pressing issues. Socio-ecological artist Colleen Flanigan has come up with a unique way to raise the general population’s awareness about environmental matters.

Flanigan is involved in creating functioning coral reefs. Zoe, for example, which means “life” in Greek, is a DNA-inspired project installed in Cozumel, Mexico. The sculpture is made of metal and is charged with low-voltage electricity to raise the pH and attract calcium carbonate and magnesium hydroxide minerals to deposit onto it. Corals readily attach to this natural substrate; they can grow faster and withstand greater environmental stress than normal.

The artist then uploads her metal designs to the Google Tilt Brush app and expands them with virtual reality reefscapes. Using the app, she can also populate the virtual reefs with other marine life such as fish and coral colonies. Tilt Brush was released in 2016 as a 3D-painting virtual-reality application that allows users to create a 3D space by with the help of a handheld controller.

Before using the Tilt Brush technology, Flanigan felt like so many of her ideas could not be express. With the use of this innovative tech, she can now simulate the evolution of her metal reefs. The artist also hopes to raise humans’ sensitivity to other species and our interdependence.

Flanigan is now working on a hypothetical projection of what our world would look like following the destruction resulting from rising sea levels.

“Art is a catalyst for change,” Flanigan says. “It can help speak to people who aren’t thinking about the ocean … so everyone can start to say, ‘now I see how I’ll get involved in this next phase of rebuilding a sustainable future for our planet.”