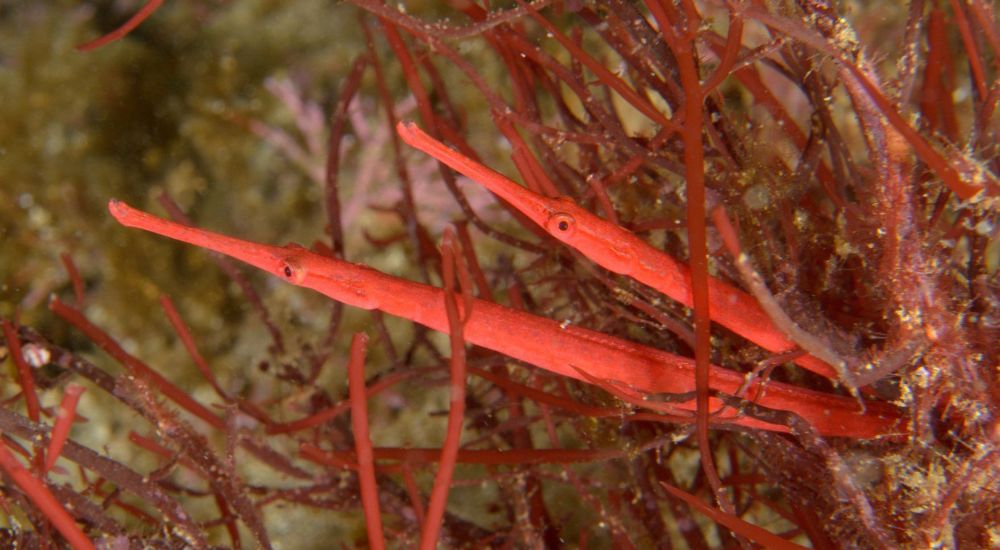 The alien-looking sponges were discovered 2 kilometers below the surface of the water on the seafloor of the Pacific Ocean. The peculiar glass sponges growing in the otherworldly landscape of the deep sea have earned the area the nickname of “Forest of the Weird,” as researchers call it. The round body of the Advhena magnifica has two openings that resemble the eye sockets of the beloved E.T. alien from the movie E.T. the Extra-Terrestrial.

Named after a cartoon character this time, the new species of starfish is called Patrick Star, which you may know of if you’ve ever watched SpongeBob Squarepants. It too was discovered in the depths of the Pacific Ocean, at 1.5 to 3 kilometers below the surface of the water. So, why Patrick Star? Researchers observed that all specimens of the new starfish species were living on sponges. Since Patrick always spends time with his friend SpongeBob, the name is a perfect reflection of their relationship.

The Dendrapta nasicola is a copepod, a small parasitic crustacean that lives an interesting and unique life… in the nostrils of its host. The animal has modified appendages that it uses to attach itself inside the nostrils of the Bathyraja scaphiops, a species of skate. The appendages grow into the tissue of the host, which makes removing the annoying parasite quite difficult for the skate. The new copepod was discovered following the careful examination of various species of skates caught in waters off Buenos Aires, Argentina.

This beautiful sea slug was first noticed by a scuba diver in 2014 in Trondheimsfjorden, Norway. Three years later, another scuba diver stumbled upon it. Scientists found out about the undocumented slug after the divers posted pictures of it on a Facebook group. After examining specimens collected by the divers, scientists concluded it is a new species and was named Dendronotus yrjargul. The scuba divers were recognized for their contribution and are co-authors of the publication describing the new sea slug species along with the team of scientists.

Deep in the Mariana Trench, at 6 to 7 kilometers below the sea surface, lives the newly discovered scavenging amphipod crustacean. The giant plastic amphipod was found to have microplastic in its digestive tract, hence the name. The microplastic fiber was greatly similar to PET, the main polymer in plastic bottles. The new species shows a sad reality – human activity has impacted even the deepest and most remote areas of the Earth.

It’s not every day that you see a tapeworm in a list of favorites, but the Gyrocotyle haffii is a strange creature even by tapeworm standards. Tapeworms usually have a scolex at their head-end, but gyrocotylideans have only a simple suction cup structure at that end. However, they have a complex adhesive organ, called a rosette, at their tail. Since the rosette resembles a scolex, this tapeworm received its common name of upside-down tapeworm.

This new bryozoan species was discovered in the Mediterranean Sea. The characterization of cyclostome bryozoan species was quite difficult due to issues in the naming of the known species. The first to propose a name for the new species was A.W. Waters, back in 1904, but because the animal was not described and there was no type specimen, it has only recently been recognized as Hornera mediterranea.

Scaleworms too are resilient animals capable of tolerating extreme conditions, including low oxygen levels. The name “Elvis worms” comes from their scales that resemble the sequins on the King of Rock and Roll’s signature attire. As for the “feisty” part, this comes from their feisty temperament. They are also known for their sparkling iridescence, which is most likely due to a thickened cuticle of the scales.

Finally, something that we, divers, actually have a chance to set our eyes on. The colorful new species of pipefish lives off central New South Wales, Australia. It is found at depths between 12 and 25 meters, making it accessible to all level divers. The new species has a long snout and thread-like prehensile tail. What’s unique about it is its bright red body, whilst other species in the genus are green or brown. These fish are often observed among red algae and pale red finger sponges. It blends so well with its environment, that it even took the researchers some time to confirm the presence of the species among the algae.

These have been the top marine species discovered in 2020, just a few of the many we have only just learned about. This just goes to show that much about the planet’s oceans remains a mystery. We can’t wait to see what new fascinating creatures we will learn about this year.