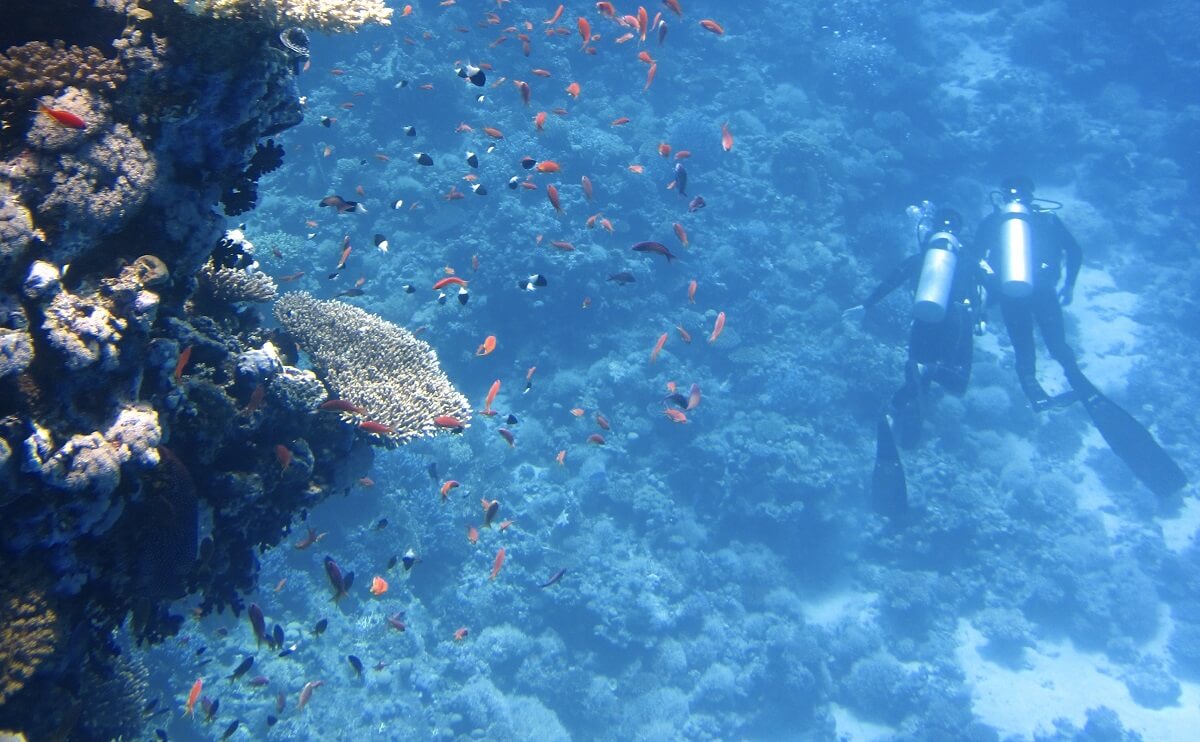 Coral reefs are the most diverse marine ecosystems and some of the most complex of all ecosystems on the planet. These large underwater structures are formed by the skeletons of marine invertebrates known as corals. Scientists estimate that as much as one million species of fish, invertebrates, and algae live or grow in and around the world’s reefs. This is truly remarkable, considering that coral reefs cover less than one percent of the ocean’s floor.

According to research, there are three main types of coral reefs – fringing reefs, barrier reefs, and atolls. Patch reefs and bank reefs are also important natural systems. We’ll discuss the characteristics of each of the different types of coral reefs and share some of the most awe-inspiring places where you can observe these stunning ecosystems.

Fringing reefs are among the most common types of coral reefs and are relatively young. They develop better on stable or rising coasts. These reefs grow very close to the shore and are generally shore-attached, lacking a lagoon. If a lagoon is present, it is usually very shallow.

There are two components to a fringing reef: the reef slope (or the fore reef) and the reef flat (or the back reef). The latter is usually the widest part of the fringing reef while the former is located closest to the ocean. The corals grow upwards to sea level or outwards towards the ocean.

The Ningaloo Reef is the largest fringing reef on Earth, stretching 260 kilometers (155 miles) along the western coast of Australia in the East Indian Ocean. It is also the only large reef positioned very close to land. The reef supports over 500 species of fish, 300 species of corals, 600 species of mollusks, and many other marine invertebrates.

Diving: The Ningaloo Reef is located in a remote area of Australia and most divers choose the town of Exmouth as the starting point. Important dive sites where you can explore the reef include Blizzard Ridge, The Floats, Mandu Wall, Norwegian Bay, and the popular Coral Bay.

Barrier reefs occur further offshore compared to fringing reefs and are extensive linear reef complexes that grow parallel to the coastline. They are isolated from the shores by a lagoon and grow along the outer edges of the continental shelf. In shallow areas, these reefs can reach the surface of the water where they form a “barrier” that prevents navigation.

Barrier reefs are the largest in size of all types of coral reefs, measuring hundreds of kilometers in length and several kilometers in width. These reefs are a lot less common than fringing reefs or atolls. Nonetheless, notable examples can be found in the Atlantic and Pacific Oceans.

The Great Barrier Reef is the largest coral reef system on Earth. It’s not a single reef as the name implies, but a very large complex composed of over 2,900 individual reefs. The reef stretches for over 2,300 kilometers (1,400 miles) over an area of 344,400 square kilometers (133,000 square miles). The Great Barrier Reef is located in the Coral Sea, off the coast of Queensland, Australia and can be seen from outer space.

Diving: For both scuba divers and snorkelers, the Great Barrier Reef offers some of the most splendid species of coral and diverse animal life. There are dozens of dive sites along the reef. Some of the most notable include Acropolis, The Wedge, The Chimney, Gary’s Lagoon, and Mackay Reef.

Atolls are oval, circular, or horseshoe-shaped coral reefs that contain coral rims. The rim surrounds a lagoon, either partially or completely. The lagoon is usually shallow and sandy, and access to the open ocean is through channels. If the coral rim surrounds the lagoon completely, then there will not be any water exchange with the ocean.

Atolls form from volcanoes and they were once the fringing reefs that surrounded the volcanoes. As the volcano submerged and disappeared from the surface, the corals continued to grow up, becoming the only visible formations in the deep ocean.

Most of Earth’s atolls are found in the Indian and Pacific Oceans. The largest atoll in the world is the 4,881 square miles (12,642 square km) long Great Chagos Bank in the Indian Ocean. The atoll is administered by the U.K. through the British Indian Ocean Territory. The islands of the Great Chagos Bank are Nelson Island, Danger Island, Eagle Islands, and Three Brothers. All islands and the surrounding waters are a Strict Nature Reserve.

Diving: Scuba diving has long been prohibited in British Indian Ocean Territory; the only diving conducted here is done for scientific purposes by military members stationed on the island of Diego Garcia. Those who have had the chance to dive these waters describe them as being the clearest and most diverse they have ever explored.

Patch reefs are of the smaller types of coral reefs. These isolated outcrops of coral grow up from the open bottom of the island platform or continental shelf. They are usually found in 3-6 meters (10-20 feet) of water. Patch reefs are surrounded by sand and/or seagrass and may sometimes occur between fringing reefs and barrier reefs, or in an atoll.

Patch reef formation is restricted to a solid surface and the patchy appearance is the result of the spaces between these surfaces. Because of the size of the solid surface on which they grow and the variation in species of coral, patch reefs have different shapes and sizes. The sand rings surrounding the patches are the result of the herbivorous fish and invertebrates that feed on seagrass.

Patch reefs usually occur within the lagoon behind a barrier reef or atoll rim. They are typically found at depths of 3-6 meters (10-20 feet). These reefs are quite common in the Caribbean and Pacific Islands. Most often, patch reefs are a part of larger reef ecosystems, so they are not recorded as individual reefs. Nonetheless, it’s worth mentioning the Virgin Islands Patch Reefs, which are small ecoregions located on the islands of St. John, St. Thomas, and St. Croix.

Diving: The island of St. Croix offers the second largest barrier reef in the Caribbean region, surrounded by many small patch reefs teeming with marine life. Notable dive sites in the area include Swirling Reef Of Death, Scotch Banks, and Cane Bay.

Similar to but larger than patch reefs, bank reefs are deep-water reefs. They consist of linear or semi-circular clusters and may begin colonizing and expanding depending on the local factors. They are built upward from the seafloor by darkness-loving corals as photosynthesis is not the primary energy source for these ecosystems.

Bank reefs generally consist of three regions. The reef flat is on the inshore side of the reef, consisting of broken coral skeletons and coralline algae. Further, the spur and groove region consists of coarse white limestone sand, and more towards the open-sea is the forereef, composed primarily of star coral.

The Carysfort Reef off the coast of Key Largo, Florida is one of the healthiest reefs in the area, providing excellent snorkeling and diving opportunities. The reef lies in 2-24 meters (5-80 feet) of water and grows 9 kilometers (6 miles) off the coast of North Key Largo, within a Sanctuary Preservation Area (SPA).

Diving: Even though Carysfort Reef is a further out diving destination in the Florida Keys, the three dive sites found on the reef are worth exploring. The shallow Carysfort Trench, Carysfort North Reef, and South Carysfort Reef dive sites are visited by scuba divers and snorkelers alike.

Coral reefs are facing major threats that jeopardize their survival. The degradation and destruction of these important ecosystems is a worldwide issue; reports suggest that as much as 75 percent of the total number of reefs are currently threatened.

As the planet’s atmosphere and waters are warming, coral bleaching events and coral disease outbreaks are becoming more and more frequent. In addition to this, the calcification rates in reef-building are being reduced by the carbon dioxide absorbed into the water. This is called ocean acidification.

If you’re a diver, there are a few things you can do to lower the impact you have on these delicate ecosystems. The first major rules are to not touch anything and to make sure your equipment is not hanging loose. A single touch can cause damage – and even kill – the coral. Work on your buoyancy control as this will improve your reef diving as well as diving in general.

Various types of human activity are responsible for the degradation of coral reefs. This being said, we should all try to lower the impact we all have on the environment, regardless of how small or great it is. Before traveling to reef dive sites, all divers have to understand the need to protect coral reefs. Enjoy scuba diving while doing your best not to disturb the marine life you encounter.