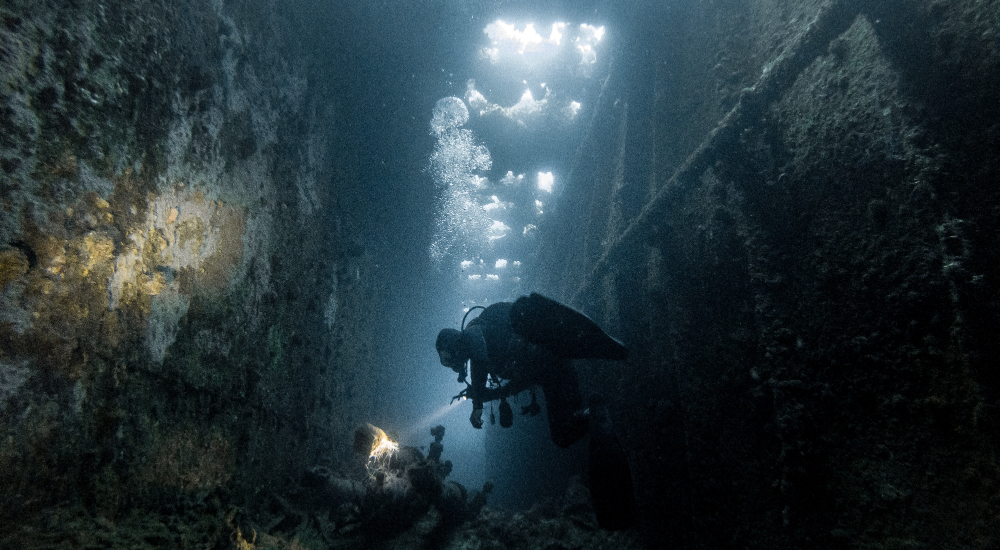 Wreck diving offers divers the chance to take a step back in time and explore old man-made structures that are now part of the oceans. Often times, these structures become home to a myriad of marine animals, from corals to fish of all sizes, which is why they are known as artificial reefs. While these ships, aircraft, or other different types of vehicles can be found throughout the globe, some regions are known to be the resting grounds for a significant number of wrecks. Take a look at the best wreck diving destinations that feature some of the most historically-rich dive sites.

Ask any well-traveled wreck diver about the best wreck diving destinations in the world and they’ll most likely tell you that Chuuk Lagoon offers the ultimate experience. As a Japanese naval base, Chuuk played an important role in World War II. The wrecks here are the result of the massive U.S. Navy air and surface attack known as Operation Hailstone, conducted against the Imperial Japanese Navy. Chuuk Lagoon is among the largest wreck cemeteries on Earth, with over 300 wrecks resting on the bottom of the Pacific Ocean, 50 of which are open to scuba divers. It is estimated that about 270 aircraft, 32 merchant ships, 13 warships, and 2 submarine tenders were sunk during the attack.

When to visit: Between December and April.
Diving conditions: During peak season, the water temperatures range from 27 to 30° C/81-86° F and visibility is an excellent 25 meters/80 feet or more.

Comprised of 23 islands surrounding a large lagoon, Bikini Atoll is one of the most spectacular diving locations on Earth, and those who dived here may even go as far as saying that it is the top wreck diving destination. The atoll, renowned for being a nuclear testing grounds during the Cold War, is now a UNESCO World Heritage Site. The sea battles fought in the area and the consequences of the nuclear testing projects have led Bikini Atoll to become a wreck cemetery filled with cruisers, warships, and aircraft carriers. The atoll was made available for scuba diving in 1996, allowing divers to experience some of the most historic and well-preserved wrecks in the world.

When to visit: May to October
Diving conditions: Water temperatures range between 27° and 29° C (80-85° F) year-round and visibility typically exceeds 30 meters (100 feet). Note that most of the wrecks at Bikini Atoll are located beyond recreational depth limits and are recommended for technical divers with previous wreck experience.

Dubbed by some as the Shipwreck Capital of the World, the waters surrounding Bermuda’s islands are home to some of the biggest shipwrecks in the world. With more than 300 identified wrecks along its coasts, it is without a doubt among the top places for divers to explore sunken treasures. The ill fate of the ships was mostly due to the hidden reefs surrounding Bermuda’s coasts, although if you’re one for myths and legends, you could say it’s the effect of the mysterious Bermuda Triangle. Those interested in the wrecks can learn about the Bermuda 100 Challenge, a project that intends to document at least 100 of the shipwrecks scattered around the islands.

When to visit: May through October.
Diving conditions: During peak season, the water temperature averages 28° C/83° F, then drops to a minimum of about 17° C/62° F between November and April. Visibility is typically around 25 meters (80 feet).

Today, the islands of Palau are a remote tropical paradise, but looking at old photos from 1944, this was far from being the leisure destination it is now. During WWII, the islands of the Pacific were subject to the devastating effects of the battles between Japanese and American troops. The airstrikes on the Japanese fleet were responsible for the sinking of more than 60 ships in Palau. Not all wrecks are still at the bottom of the ocean; over 20 wrecks have been salvaged by the Japanese and sold for scrap metal. Still, those that remained have become bedecked in corals and sea sponges and are now beautiful artificial reefs and have placed Palau on the lists of best wreck diving destinations.

When to visit: Year-round destination but consider avoiding the rainy season (July through August).
Diving conditions: The water temperature remains stable throughout the year, averaging 28° C/82° F. Visibility in Palau is usually excellent, but not around some of the wreck dive sites, where it can average a mere 10 meters (33 feet). The currents are renowned for being strong and unpredictable, but this varies depending on location.

Egypt and other nations bordering the Red Sea are among the best wreck diving destinations in the world, with a large sunken fleet and great diving conditions.
The Red Sea has a long history as one of the main waterways on Earth, but the strong winds, storms, strong currents, and shallow reefs have made navigation difficult for captains for hundreds of years. And then came the global wars, when it also became one of the most strategically-significant waterways, especially during the WWII.
Even today, it is not uncommon for ships to run aground because of the offshore reefs in this part of the world. Many of Egypt’s most dived wrecks are located along the coasts of Hurghada and Sharm-el-Sheikh, two of the most popular dive regions on Earth.

When to visit: Year-round; the summer months are great for spotting the larger species of marine animals while the winter months bring the best visibility.
Diving conditions: The water temperatures vary between 20° to 29° C/68°- 84° F and visibility is between 20 to 40 meters (66 to 131 feet). Strong currents may be experienced at some locations.

During WWII, Vanuatu was occupied by American troops in an effort to stop the advancing Japanese army. While the war is long gone, its legacy remains all around the islands, including underwater. The South Pacific WWII Museum seeks to preserve Vanuatu’s World War II heritage through the discovery and preservation of the wrecks around its borders.
If you’re looking to feast your eyes on one of the largest and most talked-about wrecks in the world, then you can’t miss Vanuatu. This idyllic island nation is home to one of the top-ranked wreck dives on the planet – the SS President Coolidge. But there’s so much more to diving here than this famous WWII ship. There are plenty of other different types of wrecks to explore, many of which are accessible to most recreational divers.

When to visit: Year-round destination, but there may be some cyclone activity between January and April.
Diving conditions: The water temperature ranges from 23° C/73° F in July-September and 30° C/86° F in December-January. Visibility ranges from poor in the murky waters to excellent, when it often exceeds 30 meters (100 feet).

Michigan and its surrounding areas are probably the most well-kept wreck diving secret. The waters of the Great Lakes are a world-class destination for wreck divers, but still very much an exclusive location that mostly the locals know about. Four of the five lakes had ship traffic for about 400 years, and the Great Lakes Shipwreck Museum approximates that more than 6,000 ships have seen the end of their cruising days here. The wrecks are preserved in relatively cold freshwater, which is why they are quite intact to this day. Numerous lost schooners, steamers, and barges can be found on the bottom of the Great Lakes.

When to visit: May to November.
Diving conditions: The water temperatures are the coldest in the spring, when they drop to as low as 4° C/40° F depending on depth and location. In the summer, the surface water temperature can reach up to 21° C/70° F, but the bottom temperatures remain quite low. Visibility is an average 12 meters (40 feet) but can, at times, exceed 30 meters (100 feet). Following storms, visibility can decrease dramatically.

The Outer Banks of North Carolina is one of the best wreck diving destinations in the world and aptly-nicknamed the Graveyard of the Atlantic because of the thousands of ships that have sunk along its shores over time. The numerous shoals and frequent rough seas have posed navigational challenges that lead to an estimated number of 5,000 shipwrecks since record-keeping began in 1526. Another danger was the Outer Banks wreckers, who made their living by luring ships to their destruction. During World War II, German U-boats would also torpedo ships along the North Carolina coast, which would later become known as Torpedo Alley.

When to visit: May to October
Diving conditions: The water temperatures range from 10° C/50° F in February, the coldest month, to about 26° C/80° F from July through September. The water is also clearer during the summer.

What are your best wreck diving destinations picks? Let us know in the comments below!